You are here: Home › Reviews › Valerian & Laureline Vol 16: Hostages Of Ultralum
By Simon Chadwick on August 11, 2017 in Reviews 0 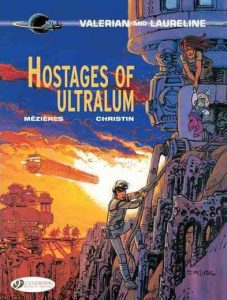 As I type this, the Valerian movie has been out for a week, so chances are more people than ever before are aware of the name, if not the source material. If you’ve not yet reached for a copy of one of the books then there’s no time like the present, as Cinebook continue to put English translations of the books out for our reading pleasure, steadily making their way through the entire run.

Valerian and Laureline have had their universe turned upside-down in the recent stories, and now finally seem to have reached a point where they can afford to relax a little, except that for all the wonders and beauty heaped upon them on a luxurious cruise only Laureline is appreciating it for what it is. Valerian, meanwhile, is distracted, and somewhat unfulfilled. The vessel they’re travelling on is an extravagant one, conducting them on an equally extravagant voyage, and that means there are many exotic and wealthy individuals partaking of the lavishness it offers, one of which is the Caliph of Iksaladam, an immensely rich being who controls the supply of ultraluminal fuel (the Ultralum of the title) which powers the galaxy’s starships. Amongst his entourage is his son and heir, a bored youth who finds a distraction in bothering Laureline, to the point that when four mercenaries reveal themselves and kidnap the child Laureline has little choice but be abducted too.

In an instant, a dull and uninspiring cruise, for Valerian at least, becomes something far more interesting as he sets off in pursuit. The Caliph is used to getting things done his own way, and can afford to pay a bounty on his heir’s safe return, and yet what he offers is unlike any bounty ever offered before, but even that may not be enough to prevent a dark and uncomfortable revelation threatening his family’s eons-old grip on power.

There’s much being written at the moment about the need for string female lead characters, and yet Christen and Mézières were writing Laureline as a confident and independent adventurer decades ago. Where Valerian barrels in, Laureline takes stock and uses her imagination and experience to gain the upper-hand, and it’s down to her quick thinking that Valerian is even able to attempt to follow her. Equally, there’s a social conscience operating here, about privilege and the exploitation of others, that feels especially pertinent at the moment, twenty years after it was written.

We get to meet a few old friends along the way in this adventure, and revisit a few places we know of too, so as I’ve mentioned in these reviews before, I wouldn’t recommend you starting you Valerian and Laureline reading this late into the books, but if you’re relatively up to speed then you’ve going to enjoy the casual, and perhaps not so casual, call-backs, nods and familiar faces.

These books are ambitious in their scope and their storytelling. They’re not hard sci-fi, nor are they a frivolous space opera, but they do combine big ideas, intriguing concepts and a dash of humour to make something that feels as fresh and relevant as when it was first laid down on paper.

And if you liked that: Volume 17 is one its way…