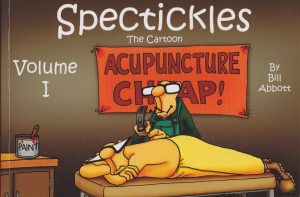 So what is it with Bill Abbott’s Spectickles characters. After first seeing a few cartoons I took the bald heads, purple rinses, rotund figures and thick glasses to indicate a more mature person. And yet in some cartoons we see these characters as parents to a small child…who also has a rotund body, thick glasses and a bald head. And then again, so do the fish. And Godzilla. And Superman.

Bill’s creations are like crossing Eric Morecambe with the Far Side and Herman, and the humour is often bitter, dark and droll – and very funny.

Bill’s discovered a way to take the emotion out of the delivery, with characters stood dead rigid and blank faced, delivering the punchline in the deadest of dead pans. Outrageous circumstances are presented as “well, what did you expect would happen” and hapless, hopeless individuals take it on the chin with a permanent air of resigned defeat.

There’s the bandaged patient, laid up in a hospital bed, grim-faced as his wife stands over him and says “Any chance you could sneak away for a little bit and mow the lawn?” Or the wife returning home laden with bags and boxes announcing to her husband, “I left your credit card outside. It’s still smoking.”

It’s as if everyone holds contempt for everyone else, and yet they’re all expecting nothing less. And that’s strangely funny. In fact, it’s often hilarious.

It’s not always easy to explain quite why something has made you laugh, but one cartoon that particularly tickled me was one of the few cartoons to feature at least two of the characters without the glasses. Perhaps it’s the mirroring of the waiters and octopus’s goggled eyes, or the fact that it’s easy to miss the diner’s glasses and identify the octopus as the top of his head. Either way, I really love this one. 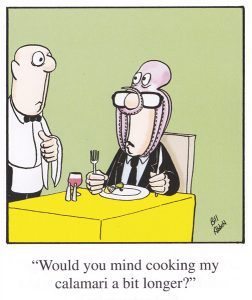 Bill’s announced a limited print run for this Spectickles book so don’t hang about if you fancy one. Check out his Facebook page for more details: www.facebook.com/billabbottcartoons/

And if you enjoyed that: Visit the CCGB website for more CCGB members’ books.