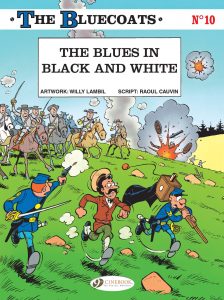 Blutch and Chesterfield are back in the saddle of the American Civil War, charging repeatedly into enemy fire and picking their way back through the carnage. One such return places them rather too close to some exploding shells and Chesterfield finds himself blown into a tree. By the time Blutch has tracked him down he discovers someone else has found him first – a photographer. With them both being new to this artistic process they’re naturally fascinated but also a little appalled, particularly Chesterfield who finds his ignominious landing in the tree is proving a popular and hysterical photographic print with the troops.

After being on the receiving end of a couple more photography blunders Chesterfield has had enough but, because the photographer is there on the instructions of President Lincoln to record the war, Chesterfield’s blustering sees him seconded, along with Blutch, in keeping the war photographer safe. Both men end up with their own disgruntled opinion of the occupation but it isn’t until Blutch finds himself behind the camera that the dynamic begins to switch and we get to see past the bickering to the reason these two are inseparable.

This is a book about a friendship in the face of an unpleasant and brutal war. The fact people are senselessly dying all around them only for the remnants to be scooped up and sent straight back in again is never shied away from, although as this is a book open to all age groups the bloody reality is very much toned down. Remarkably this doesn’t trivialise the war – there’s still plenty of fighting and explosions, not to mention consequences. Chesterfield’s struggle to come to terms with Blutch’s new appointment is touching, as is Blutch’s solution to the injustice dealt out to his sergeant.

The Bluecoats series of stories are unusual in that they attempt to tread the line between comics predominantly aimed at kids and the unpleasantness of war, all the time keeping a humorous friendship funny and investing each story with some historical note to hang a plot on. That’s no small task, but Lambil and Cauvin manage it each time. Good books like this are a doorway for curious minds to go on and explore more, so these would make a brilliant addition to primary school libraries or bedroom bookshelves.

And if you liked that:Volume 11, Cossack Circus, coming soon