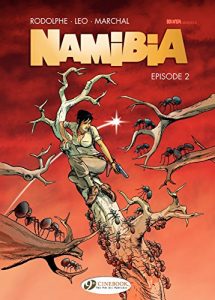 Kathy Austin, the British agent, has just confronted what appears to be Hermann Göring in a small out-of-the way bar in Namibia, with shocking consequences. Now she, and her two companions are attempting to piece together exactly what it is they have witnessed so far, but as they do so they come across a middle-aged man helping a very elderly person across the road, accept the middle-aged man claims he is with his son. Kate insists they are taken to the nearby dispensary where they discover more of the same incidents. Unknown to Kate, they’re being watched, and when they later chance upon a large cemetery with Hermann Göring’s grave – and his body in place – events take another strange turn.

Meanwhile, in London, similar bizarre circumstances to those of Göring’s supposed appearance have been reported, so the decision is made to send a specialist unmarked military unit out to Namibia to support Kate and investigate a secure compound. However, this time, Kate may have gone too far.

Although the outlandish extinct creatures have, to date, been missing from this sequel to the Kenya series, we’re getting plenty of giant insects, other-worldly technology and a deepening mystery. Perhaps it’s the unique setting of 1940s’ Africa but the sense of dislocation between the period and the science fiction promise of the series makes the enigma all the richer. After all, there are no throwbacks to popular culture for Kate to call upon. Marchal is exemplary in his mimicking of Leo’s art style, so much so that it’s very easy to overlook his contribution altogether. The book’s ability to capture a sense of time and place, while teasing something so futuristic and alien, and without detracting from either, makes for an enticing read.

And if you liked that: Pick up the third book!