You are here: Home › The Marquis Of Anaon Vol 3: The Providence
By Simon Chadwick on September 5, 2016 in Reviews 0 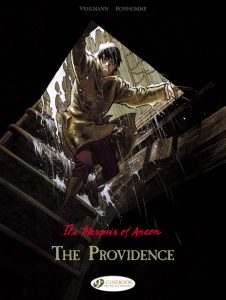 The Providence sees Jean-Baptiste heading for Andalusia at the invitation of the young Countess of Almedía, keen to share in France’s Enlightenment. This requires passage on a ship which swiftly sails into a storm where Jean-Baptiste, curious as ever, drags himself on deck to witness the weather at full throttle alongside the first mate. Not only do they experience the brutal force of the storm, but another ship bearing down on them through the churning waves. It’s only swift action from the first mate that narrowly avoids a cataclysmic clash of vessels, but not before Jean-Baptiste spies a lone figure on the opposite deck.

The next day, on a calmer sea, they find the ship, damaged and lilting, but not a soul alive, although there are plenty of skeletal corpses, including a man who has locked himself in a cabin and perished there, showing a broken backbone. The ship’s log shows the ship had set sale from the Congo bound for a French colony, but along the way tragedy had struck, and possibly a mutiny as a lifeboat was missing. Further reading of the man’s journal reveals an unscrupulous man keen on taking full advantage of the slave trade.

The captain announces they must delay their journey and tow the stricken ship to the nearest port, but the ghost ship fills the crew’s head with fear and when they begin to succumb to a maddening sickness that fear turns to desperation. Jean-Baptiste understands it is an earthly disease rather than an other-worldly scourge and that if the ship reaches a densely populated port it could be catastrophic for all.

Once again, this is a book about an age coming to terms with reason and evidence over and above that of superstition. By attempting to understand the nature of the problem a simpler but perhaps just as dangerous situation reveals itself, but at least one that can be understood and possibly combatted. Jean-Baptiste is not confident in his methods, but he pursues them with rigour where almost all else do not. To see a danger differently doesn’t mean a danger isn’t present, but it better prepares him to tackle it while those around him are losing their heads, and their lives.

Another fine volume, cleverly written and fabulously illustrated, not least because of the brief appendix done in the style of a 1731 newspaper where the news interprets Jean-Baptiste’s actions with misunderstanding and sensationalism, cementing the brilliance of the book’s concept.

And if you liked that: Matthieu Bonhomme reminds me of Eduardo Risso’s work (which can’t be bad), so check out Risso’s work on 100 Bullets