You are here: Home › The Marquis Of Anaon Vol 2: The Black Virgin
By Simon Chadwick on September 2, 2016 in Reviews 0 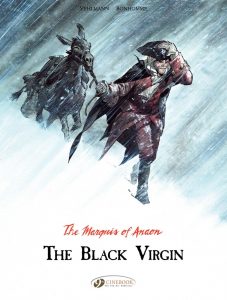 Jean-Baptiste has now spent several months investigating strange goings on, bringing him to a community in the depths of winter towards the close of the year. In two subsequent years a young girl has been killed and the murders have been barbaric and bloody, leaving many of the local populace to see it as the work of a demon or witchcraft. Jean-Baptiste presents himself to the Count, who lives in a castle overlooking the town, and offers his services to study what has taken place before and see if they can prevent such a thing happening again this year.

The murders have both taken place at a shrine to the virgin of Puy-Marie, situated out amongst the woods, and when Jean-Baptiste pays it a visit he witnesses gypsies paying homage at the shrine , as they do every year on their pilgrimage. They are viewed with great suspicion by the locals, particularly as the gypsies brand of faith contains so much that the villagers consider to be pagan influenced. This suspicion is extended to Jean-Baptiste himself, who struggles to get the locals to open up to him until an elderly farmer asks him to visit his wife who he believes has had a spell cast upon her. They want Jean-Baptiste to lift the curse, failing to understand his reasons for visiting the town or his abilities, but instead projecting a belief in him arrived at through their own superstitions. Challenged in such a way, all Jean-Baptiste can do is fall back on his logic and reason, and what follows is little more than psychology, or in a different narrative universe, what Granny Weatherwax would call Headology.

It’s not enough to prevent another murder taking place, but because the elderly couple can only rationalise what has happened to them in terms of the supernatural it is enough to instil some confidence in the locals that he can get to the bottom of these bloody killings. This allows him to dig deeper into the goings-on with the locals, the gypsies, a local priest, and a disfigured outcast, and to finally put a stop to the deaths.

The genius of the story is to apply the thought processes of the period. Science and critical thinking are a long way away from establishing a more accurate picture of the world, so people have to frame their understanding via their religion and their superstitions. To them, that makes sense, but it obscures deeper and dangerous crimes and allows the perpetrators to hide behind a mask of black magic. Jean-Baptiste, having had his eyes opened in the first book to the reality of what was considered a supernatural event, is taking the first steps to question such happenings through evidence, although he cannot completely throw off the rationale that society uses to explain the world around them. This brilliantly gives the story an air of uncertainty as we explore and investigate the unknown through Jean-Baptiste’s eyes.

I love the artwork too. Cleanly illustrated and encapsulating the bleakness of the winter landscape as well as the people’s outlook, it thrums with foreboding whilst offering rounded characters. There’s desperation in almost every panel, but equally a determination that something here needs understanding.

I don’t think you can far wrong with this one.

And if you liked that: Book 3 is already available