You are here: Home › The Survivors (Quantum Anomalies) Episode 3
By Simon Chadwick on June 1, 2016 in Reviews 0 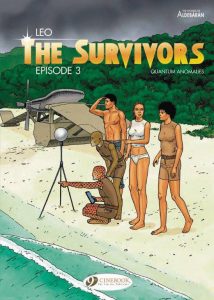 Having stumbled through another anomaly a small group of the survivors, Marie, Max, Ilse and Alex, find themselves six years into the future, but fortunately they’re quickly in the presence of their companions, now older, wiser and settled on this strange planet. They’ve been taken in by the feline-like Antac and his companions as a thank you for saving him, and despite their very different backgrounds have all become stronger for it. Marie’s group are invited back to the home they’ve built, but along the way they see many strange and disturbing sights of other alien groups scratching a living on the planet, some of which are appear to be taking advantage of other sentient beings.

Antac’s people, like all the aliens stranded upon the surface of the planet, are advanced enough to have been capable of space travel to get them this far in the first place, and so have used their skills and knowledge to establish a life of trade in a decent-sized township. They’re also curious about the anomalies and want to investigate a convergence of them around an archipelago so have built a simple plane that seats five. They offer to take three of the group, Alex, Marie and Djamila along with Antac and his partner Selkert.

Despite the precariousness of their situation, the limited amount of humans present of the planet, coupled with their youth, means that bonds have formed and tensions are raised among the survivors, to the point that two of the original group have chosen to live a much more frugal life elsewhere in the township. There also tensions between Alex, Marie, Ilse and Max too, and although Alex seems determined to do the right thing by Ilse he is clearly drawn to Marie, and now he’s found himself on a potentially dangerous mission with her.

What they discover out at the archipelago are yet more strange aliens living on a raft-like town, and a bizarre anomaly that behaves like no other they’ve witnessed so far. But it’s the coming together of these two discoveries that takes their scientific mission in a worryingly different direction.

The Survivors stands apart from Leo’s other books in that it’s not just about humanity’s first faltering steps to other worlds, but other sentient lifeforms too, and they are forced together. Although the other beings may sometimes be more advanced, they are all reduced to survival upon this planet with its strange embrace.  Leo repeatedly captures a sense of wonder in the potential for difference, albeit sometimes only subtly, of a creature, plant, landscape or being, and he avoids the need for comic-book villains to drive the plot by pitting the characters against one another and the environment for their survival. You don’t need a Machiavellian bad guy when the natural order and humanity’s own destructive tendencies are chomping at the bit to unstable things.

Utterly fascinating, this is an astounding science fiction tale that deserves your attention.

And if you liked that: There are a host of other books from Cinebook – take a look