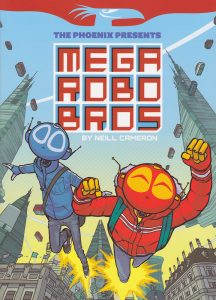 Set in London within the not too distant future, this is a tale of two adopted brothers trying to cope with all the everyday worries of any other child, including getting on at school and bickering with your sibling. The difference here is that Alex and Freddy aren’t two ordinary boys, but a pair of robots.

They’re not entirely sure of their own origins, just that they’re immensely powerful and that they’re to keep those powers in check and not draw attention to themselves, so they go about their daily routines, including school, and live as normal a life as you might expect. However, it’s a little hard to gloss over the fact that they are, quite clearly, robots, and that naturally draws attention. Also, Alex is a little older and more thoughtful than Freddy, so much of his thinking goes into working out how he fits in in a human world, particularly when lessons are talking about the connectivity of life through evolution. But the biggest complication is a character who appears to be robotic like them and who is engineering situations that force Alex and Freddy to use their abilities to protect the populace. There certainly are other robots in the world, but none have the independent sentience that Alex and Freddy display, and this villain is taking over these other robots and making them a very real threat. Although great effort is made to make Alex and Freddy’s interventions secret, it’s obvious that in a connected world, in the heart of London, this is never going to be a long-term plan that will work.

Mega Robot Bros is another great collection from the pages the Phoenix comic. It’s a story about personal growth, self-discovery and finding yourself in the world, showing a sensitive side amongst the adventure that works incredibly well. Alex and Freddy are typical young boys, instantly relatable but at the same time fascinating for their differences. It’s swiftly obvious why this strip strikes a chord with its younger readership and a big hand has to go to Neill Cameron for both writing and illustrating it.

And if you liked that: Check out Neill’s How To Make Awesome Comics

EU must be joking!
Spirou & Fantasio Vol 9: The Dictator & The Mushroom