You are here: Home › Frankenstein Underground
By Simon Chadwick on December 30, 2015 in Reviews 0 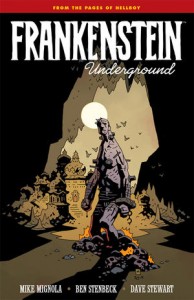 Hellboy creator Mike Mignola brings Frankenstein’s monster firmly into the fold with this excellent exploration of the creature’s tortured and troubled struggle to live some sort of life. Wanted by the French collector of grotesques, the Marquis Adoet de Fabre, Frankenstein’s monster is hunted in Mexico where he has been seriously wounded. Taking refuge in an ancient temple he finds both healing and death, and his frustrated outburst shatters the ground beneath his feet and plummets him to the cavernous pit below where strange animals dwell, not to mention an odd-looking race of men and the last of an explorative party that proves to be the biggest challenge of all.

Like Mignola’s other books, this is a great blend of horror, mythology, mystery and a few slugfests, which are skilfully interwoven into a greater whole. Frankenstein’s monster is not a bumbling half-wit, but a frustrated and misunderstood individual looking for some sort of peace in a world that could never accept him. Mignola and Stenbeck invest him with humanity and pathos to create a sympathetic character that you can’t help but feel for, making him instantly at home within the world of Hellboy, and, with luck, someone we’ll get to meet again.

If you’ve not read a Hellboy book before but fancy dipping your toe into the dark world Mignola’s been crafting then this stand-alone book isn’t a bad place to start, offering a fresh take on a familiar character that will help ease you in and win you over.

And if you liked that: Check out Hellboy In Hell for more of the same