You are here: Home › Wayne Shelton Volume 3: The Contract
By Simon Chadwick on December 23, 2015 in Reviews 0 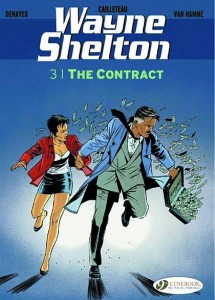 Wayne Shelton is quite a daring series in that the lead character is, quite deliberately, an old fashioned action hero type who, although still capable, is ever-so-slightly past his prime. He has aged with grey around the temples, and he’s not quite up-to-speed with computers and their wider implications, but put him in a sticky situation where a cool head and quick thinking are required and he’s going to deliver. He doesn’t look like your typical modern man of action, so readers are asked to bear with the unfolding story, and be reassured that it’s Van Hamme at the helm.

Following the betrayal during their previous mission it has fallen to Shelton, and his sense of honour, to deliver his associates’ share of the proceeds to their chosen next of kin. In itself this should be a simple enough task, but somebody is accurately tracing his movements and attempting to take him out at every turn, but with a lifetime of enemies behind him he cannot be sure who is raising a hand against him. Fortunately he’s also being followed by a mysterious motorcyclist who seems interested in keeping him alive, so with help he stands a chance of getting to the bottom of it all.

Shelton is an interesting character in that he’s competent and self-sufficient, but the creators skilfully weave a vulnerability that shows that, slowly, he may be becoming out of tune with the world. What he is is a man who is quick to take advantage of a situation, so it remains to be seen if this vulnerability is ignored or tackled, but in this volume it is almost his undoing.

There’s a feeling of a seventies’ or eighties’ thriller about this, which fits nicely with the depiction of Shelton, so if you enjoy a good caper then this should tickle your taste for adventure.

And if you liked that: Volume 4 is on its way soon