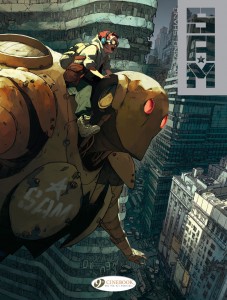 The band of surviving children are struggling on amongst the ruins of the city, hiding in the shadows and beneath the surface while robot patrols seek to eliminate them whenever they raise their heads. It’s a bleak existence, but one they’ve become accustomed too, even though dinner is increasingly rat. It’s been a year since they last saw Sam, the giant humanoid killing machine that became protector following Ian’s intervention. He continues to brood over what might have been, and where Sam has gone, while the others have begun to doubt what exactly it was they saw and experienced, petrified that Sam’s disappearance equated to him returning with the machine army.

While returning to their hideout the small group of survivors decide it will be safer to enter the old metro network, which unfortunately plunges them into the heart of danger as they encounter a vicious millipede-like robot. Just as all seems lost Sam returns and his brutal display of power saves the children from certain death.

Ian is overjoyed to see his hulking friend again, and the dramatic rescue goes some way to restoring the others’ faith in it. But it’s how they cope with Sam tagging along when they’re out for supplies that will truly cement their trust, particularly when the refugees from the Museum tunnels get in touch.

It’s interesting that this series is running alongside the equally captivating Alone. Both have their merits although Sam certainly feels like it’s intended for a slightly older audience. Where Alone is colourful and the setting not too dissimilar from today, Sam is set in an obliterated metropolis of broken buildings, shattered glass and drifts of detritus. It’s grim, but the children have grown up with it, and are coping with it in a way that only children can. An instinct for survival is pushing them forward, and with Sam’s assistance that survival may not be guaranteed but the odds are certainly improved.

I’m enjoying both the writing and the art immensely, especially Shang’s style that is a nice blend of manga and contemporary that should appeal to a younger audience. Although there’s an obvious direction this series could take, events in this book suggest it could be attempting to surprise. Either way, I’m looking forward to more.

And if you liked that: Volume three on its way