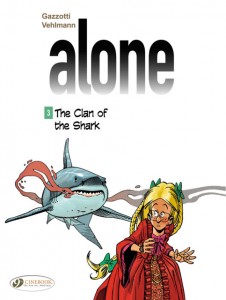 Alone is a well constructed, well presented thriller aimed at kids and young teens that mixes the simplistic outlook of childhood with having to survive in a world with no adults and very few other children. It treads a careful line between the darker horrors that reality would through up and a youthful innocence that keeps the characters bouncing along looking for answers to their predicament.

In this tale they’ve moved beyond the city via an adapted double-decker bus and, following a run in with a pack of dogs, are escorted to safety by another group of kids into a Treasure Island theme park. The park is home to many children, and they’ve adapted to their unfortunate existence by splitting tasks down gender lines and following the rule of law as laid out by Saul, the son of the park’s one-time owner. He enforces this rule, like all good dictators, through fear, something he’s keen to demonstrate around a large aquarium containing the world’s only captive great white shark.

So our group of children find themselves stripped of their new-found liberty and coerced to conform to Saul’s way of doing things, and without ever being asked if that’s what they want. Saul clearly sees the intrepid Dodzi as a threat from the get-go and immediately sets out to belittle and undermine him, while Leila and Ivan rebel against the gender stereotyping imposed upon them.

There’s a genuine threat of menace present as the children aim to overcome their situation. Gazzotti and Kehlmann skilfully steer the story as close as they dare to a darker, and perhaps more realistic, tone without losing sight of their target audience and their sensibilities. The result can be a little eye-brow raising in places, but it doesn’t overstep the mark and makes the menace that more believable.

An excellent series, Alone deserves greater recognition. If you’re kids are into good thrilling stories then share this with them.

And if you liked that: Volume 4 on its way…