You are here: Home › Harvey Kurtzman’s Jungle Book
By Simon Chadwick on March 28, 2015 in Reviews 0 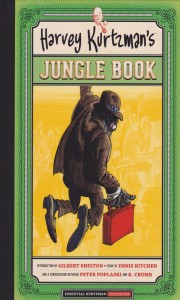 Back in 1958 Harvey Kurtzman wasn’t doing so well. The creator of Mad had been turfed out of his own creation and several other projects had either failed or just failed to materialise. However, there was a glimmer of hope because the company responsible for packaging up old Mad strips into pocket paperback collections was willing to take some original material direct from Kurtzman and print it in what would essentially be the USA’s first graphic novel. The title, Harvey Kurtzman’s Jungle Book, was a last minute change for the project, as the original title, Harvey Kurtzman’s Pleasure Package, was perhaps a little too suggestive.

Kurtzman created four tales for the book, each very different in subject but utilising his quick wit and punchy dialogue. Not so much innuendo but outright lasciviousness in places, this was a book not aimed at the market who purchased the Mad paperbacks and so, sadly for Kurtzman, it was a financial disaster.   However, it is a really good book, and is just as entertaining now as it was then, with the Comics Journal ranking it number 26 in the top 100 comics of the 20th Century.

Due to the quick turnaround Kurtzman was told he could get away with creating the artwork on lined paper and lines wouldn’t show up on the final print (they clearly do) and as the book developed his painted tones can be seen to change considerably as he learns how best to use them, something that troubled him immensely once the book came out as he didn’t like the results.

Because, at the time, the book failed Kurtzman was forced to seek work via Hefner’s Playboy, and although he was never comfortable with the way he was pressured to be more sexual over and above the humour in Little Annie Fanny, it was paying work.

And if you liked that: You might enjoy the Humbug collection, another short-lived Kurtzman project in the spirit of Mad.