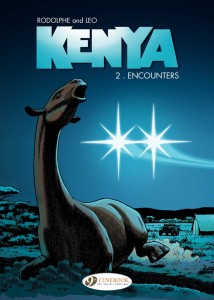 Kathy and her colleagues Fuchs and Merlin are investigating the disappearance of a safari led by American John Remington. Clues to exactly what took place come from, potentially, the only survivor, who now acts as their own guide, and who fleshes out his tale of how Remington and his group had attempted to trap a huge prehistoric beast called an Indricotherium. However, in doing so, the enormous mammal wedged its leg in a crevice and the party were forced to set up camp around it while they worked on a way to free it. Tensions were already running high, not least because of an open infidelity, but all this comes to a crashing halt when the guide wakens to discover slaughtered individuals who appear to have been raked by claws and teeth before stumbling upon a bizarre ape-like creature with a thick golden mane feasting on who he thinks is Mrs Remington. At this point he flees and that’s the last knowledge he has of the group.

Kathy and her small group have little trouble finding what remains of the camp, but any trace of the Indricotherium and the bodies has vanished beyond scrapes in the earth. They do, though, find what they think is the melted remains of one of the jeeps, pick up the companionship of a dog, and begin to trail an elephant herd that appears to contain a mammoth. Whilst in pursuit of the pachyderms they end up getting rather too close to yet another strange and bewildering creature which throws up yet more mysteries, while elsewhere the answers to what happened to some of the other members of the Remington party that fateful night at the camp gets some answers.

There are heaps of weird and wonderful things taking place in these pages, and the restraint of the 1940s’ setting helps to ground the surreality of it all. The odd nature of the creatures appearing reminds me a little of the TV show Primeval, although I hope Rodolphe and Leo intend to offer a few more answers than we got from that. And if we’re on the subject of TV shows, perhaps with a dash of Fringe following the creature from the latter pages of the book, too (which can’t be a bad thing). A tantalisingly tale to date, and one I hope that continues to deliver on its promises.

And if you liked that: If you’ve not discovered them before then indulge yourself with Leo’s Aldebaran series