You are here: Home › XIII Mystery 1: The Mongoose
By Simon Chadwick on November 3, 2014 in Reviews 0 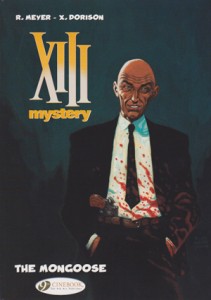 XIII is one of Cinebook’s strongest and most intriguing titles; an intelligent and involving series steered through its many complex twists and turns by the masterly Jean Van Hamme and wonderfully illustrated by William Vance. Throughout its many episodes it spawned a host of supporting characters across the globe, and it’s those characters that now take centre-stage with XIII Mystery. Each book takes one of those characters and promises to reveal something of their back story and how they became the person who eventually crosses paths with XIII, and, first of all – and the perfect choice at that – is the Mongoose.

The Mongoose is a hired killer and throughout the XIII series he was a despicable and determined individual that almost spelt the end for XIII on more than one occasion. But in any story of heroes and villains it never should be just black and white – it’s the shades of grey that make the characters interesting and their motivations believable. So we get to follow the Mongoose’s life, from an orphaned boy taken in by a carpenter during the Russian rule of Berlin in 1947 right up to the moment he is thrust into the narrative of XIII. Along the way his motivations are constantly those of someone attempting to make the best choice from a bunch of poor options, so although he is striving to do the right thing, the choices are never particularly good to begin with and he begins an inevitable slide into violence and death. At first it all seems to be honourable – a code of conduct, a guiding mentor, and all to save the man he thinks of as his father, but the assassination game is far from honourable and its ramifications will catch up with him in the end.

This is all I hoped it would be, as it doesn’t re-write the character as an anti-hero but instead spells out the tragic trajectory that once begun cannot be derailed. Dorison, the writer of the fantastic Long John Silver books, where he has equal success with a different kind of rogue, does an excellent job from page one, while Meyer’s illustrations reminded me a perfect blend of Eduardo Risso and Dave Gibbons, which could never be a bad thing.

If you’re not familiar with the world of XIII and the detailed web of stories and lies that lie therein, then the first you need to do, right now, is order yourself a copy of book 1 from www.cinebook.co.uk.

And if you liked that: There are more individual tales to come, with book 2 focusing on Irina – coming soon.