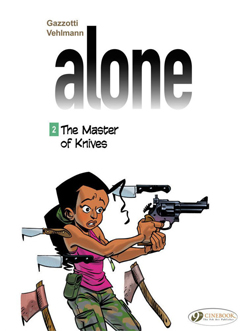 This tale of a small group of children attempting to survive in a city devoid of people after an inexplicable event just keeps on impressing. It’s a strong mix of childhood curiosity, fear of the unknown, innocence and trying to do the right thing, but it also has a Lord Of The Flies undercurrent to it threatening to bubble-up to the surface.

For all the good decisions they make they inevitably make a bad one, such as when they decide to move into the luxury of the Majestic Hotel in the city for the space and the protection it provides. However, they’ve been back to their former homes and collected personal items and Ivan has decided to bring along his dad’s handgun and then he discovered the minibar. So he and Leila find themselves on a hotel balcony taking pot-shots at neighbouring building’s windows, something that Dodzi immediately sees the dangers of and attempts to take away the weapon, only to have the others turn against him.

The gunshots appear to have drawn the attention of another survivor of the mass disappearance, but this survivor doesn’t look as if he’s after company. Masked, and brandishing a cloak hung with knives, he tempts Dodzi into a building and attempts to murder him. Dodzi escapes to the rooftops only to become trapped with no visible means of his pursuer getting him or he himself getting down. So the masked knifeman turns his attention to the hotel.

For much of the book it feels like we’ve got a stereotypical villain introduced to keep the plot ticking along, but the creators resolve it in a quite unexpected and rather clever way, underscoring that these are just children who don’t always appreciate the results of their actions.

There are a lot of good ongoing stories out there at the moment, and Alone – good as it is already – has the potential to be one of the best of them.

And if you liked that: Volume three is out soon