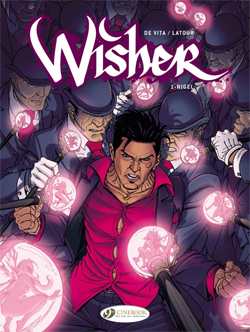 There’s no getting away from the fact that the lead character here is called Nigel as it’s in the title. I suppose it makes a pleasant change from the ubiquitous Jack as a hero’s name, and the creators are striving for an English set up so it’s understandable, perhaps, that they settled on Nigel as it screams Englishness. Although, it should be said, Nigel may have very little to do with England at all as he is a genie, and the last of them, although he doesn’t seem to remember too much about it, or quite how powerful he is. Others do, though, and they’re closing in around him in ever decreasing circles.

The book’s set in London, and De Vita and Latour play to this well, with a well-realised vision of the city. I read so many bad American comics in the 80s and 90s where London was depicted smothered in fog and everyone wore cloth caps that they became too painful to read, so it’s good to see the effort shown here to illustrate a modern vibrant city – a geographical appreciation shown by our continental cousins in all the Cinebook offerings (and, to be fair, in an increasing amount of American comics too).

As the story unfolds Nigel learns he’s being sought by MI10, comprising some very Alan Davis-looking enforcers wearing bowler hats, pinstripe suits and carrying canes topped with trapped faeries. At the same time some other people of a slightly odder persuasion, albeit that’s not always immediately obvious, appear to be keeping an eye on him without directly revealing their interest  until the enforcers get Nigel trapped.

So there’s an interesting mix of magical fantasy, London-centric action and a healthy dose of mystery. A few big questions arise, particularly about Nigel’s briefcase and how he’s using it, plus his enigmatic past, and then there’s the bigger question of why the British Government have such a downer on magical folk that there are so few of them left, and those that are are hiding in the manner we find them.

It’s tantalising, and it certainly looks good, so I’m intrigued to see where De Vita and Latour take it next.

And if you liked that: For a different magical tale, try DC’s Fables