You are here: Home › Children in Need 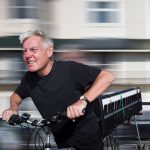 By Cartoonists Club on October 25, 2016 in Cartooning News 0

This Summer Cartoonists’ Club member, ex-Dankworth pianist and former MD for Matt Monro, Mike Hatchard decided to celebrate his sixtieth birthday by cycling from Land’s End to John O’Groats the long way (via Kent). Furthermore, he decided to take his electric piano with him (on a trailer) and performed over fifty concerts in a variety of […]

Continue Reading
By Simon Chadwick on July 11, 2016 in Articles 0

By Simon Chadwick That fine fellow Mike Hatchard, as already reported on this site, is cycling from Lands End to John O’Groats for Children In Need, and doing the whole thing while pulling a piano on a trailer behind his pushbike. If that were not an achievement in itself, he’s also performing a gig most […]

This summer to celebrate his sixtieth birthday, Cartoonists’ Club member and veteran Edinburgh fringe performer Mike Hatchard is cycling from Land’s End to John O’Groats…… towing a piano! Not a baby grand obviously but a hefty electric one nevertheless. Performing concerts along the way (performing at the Edinburgh festival en route) he will be raising money […]