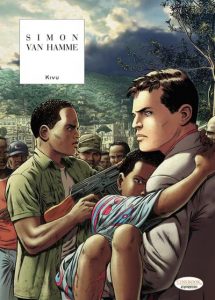 It won’t be the first time I’ve said it, but comics and cartoons are a great way for getting across all sorts of information for a new audience. Inevitably it means simplifying a sometimes difficult or nuanced subject matter. But, if given room, it can draw the reader in deeper and put flesh on the bones of what it’s trying to convey. Great examples of this are Darryl Cunningham’s books on science and billionaires, or Vanni, about the Sri Lankan conflict.

Kivu attempts much the same thing. It takes a very difficult, and largely unknown subject, and presents it unflinchingly to the reader.

On the edge of the Congo, on the border of Rwanda, is a restless province called Kivu. Unfortunately for the inhabitants, it is rich in coltan, an essential ingredient in all our modern phones and tablets. So the local populace is terrorised by a local militia. Beaten, raped, mutilated, enslaved, murdered. It’s a bloody, lawless place, and even the militia leader is not safe from a chance reprisal. It’s the militia leader who connects the clearing of the land and the extraction of the coltan to the processing of the ore in neighbouring Rwanda. For the companies that profit from the ore’s extraction, it is essential that someone equally brutal and compliant is put into place, but that’s not quite how it’s sold to Francois Daans when he’s sent out there from Europe. He believes he’s just helping secure a new principal director of production.

What sells the story to the reader is not Francois and his courageous actions, but that of Violette, a twelve-year-old girl. Along with her brother they watched their village burn, and were themselves captured. On the brink of being raped Violette’s brother drove a blade into her attacker – the militia leader Francois must unwittingly replace. And so we follow the children’s journey too. We’re offered a glimpse of the indifference, the exploitation, and the misery of their situation, and we’re reminded that their situation is far from unique.

There are two other heroes in this tale. Dr Mukwege is a surgeon at the local hospital who struggles continuously to repair the horrific wounds given to the Kivu women. He is occasionally assisted by Guy-Bernard Cadère, a pioneer of non-invasive surgery who gives up time to travel to the province and offer what help he can. These are both real people, helping others to overcome the horrors inflicted in the search for coltan.

Arguably there’s no happy ending to the tale because, being based on true events, that would be disingenuous. But what the book does do is broaden the awareness of the problem. It will make it much harder for manufacturers and consumers to look the other way.

Because of the nature of the subject matter, it would have been all too easy to stray too far into the realms of fantasy and create an action hero answer.  Van Hamme’s writing is better than that, though, and honed through his writing on the likes of Largo Winch where international business decisions can often present clear and present problems for others. Van Hamme skilfully negotiates this tricky pack of fact and fiction in a way that perhaps many other writers would have struggled with.

If you’re already a Van Hamme reader this will be an easy sell. If you’re interested in learning about western impact on other parts of the world, injustice, or just appreciate a well written and illustrated human story, then this is well worth your time.

And if you liked that: Check out Van Hamme’s Largo Winch series

The Crogan Adventures: Last Of The Legion
The Book Of Forks