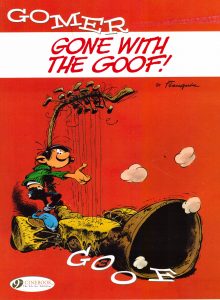 Franquin’s absurdly useless creation returns for another volume. By now we’re all quite familiar with Gomer’s world and place of work, so certain repeating gags and call-backs just keep working better and better. As featured on the cover, this book features Gomer’s efforts to make a new musical instrument which, when played, proves to be the most bombastic and deeply resonating machine yet devised by man. Ceilings crack, chimneys topple, chaos ensues.

The comical, well-meaning buffoon is a staple of much comedy, but Franquin’s challenge was to make it work week after week in just a few panels. His inventiveness, coupled with his amazing cartooning talent, meant that pretty much no door was closed to him. Conjure pretty much any situation and he could run with it, setting his lead character loose to do what he naturally, and unfortunately, was destined to do. But because it was originally presented as a weekly strip Franquin could also re-use characters and situations for a longer pay-off (or, at least, a similar payoff executed via a different set of circumstances), so when Gomer joins a band there are plenty of opportunities to exploit their practise sessions and friendships, including placing them into running gags for different pay-offs. A particular favourite is when Gomer has his tin opener confiscated and has to resort to involving a band member and an elevator to get around the problem. It was never going to end well.

There’s something immensely enjoyable and satisfying in Gomer’s chaotic tomfoolery. If you’ve not yet got to grips with Franquin’s work this wouldn’t be a bad place to start.

And if you liked that: Book 4 out soon!

King Coo: The Curse Of The Mummy’s Gold
Baggage