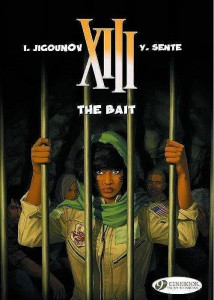 This must be a task originally undertaken with some uncertainty as the XIII creators’ roles are big shoes to fill, but Jigounov and Sente’s second outing at the helm prove the series is in capable hands.

We catch up with Jones, stationed out in Afghanistan, and doing rather well as a Colonel. Given the task of piloting a visiting senator she has no idea she’s being set up for an audacious ambush as a plot unfolds to draw XIII out. But XIII isn’t alone – he’s not even in the US – and he’s able to rekindle his small network of capable supporters to go to Jones’s aid, even if that’s in the knowledge that it’s all a trap. And Jones is hardly one to sit on her backside and do nothing herself.

This is bedding down into a solid thriller as it respects the narrative that’s gone before and attempts to explore new paths. It’s remarkably at one with the original series with perhaps the only notable difference is that the time period has caught up slightly, as expressed through the technology used. The characters have time to breathe giving us the time to care, and there doesn’t seem to be an inclination to add too many plot threads and twists (as when Van Hamme was building the tale) which I for one am thankful for – there’s plenty going on in XIII’s world as it is.

And if you liked that: Catch up on all things XIII at www.cinebook.com