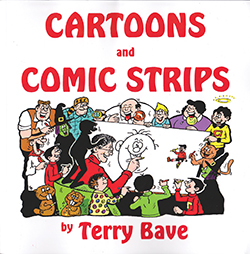 I’m of the right age to have grown up reading the likes of Whizzer & Chips, Whoopee and Buster, enjoying the antics of Odd-Ball, the Slimms and Sammy Shrink. Any trip to the newsagent resulted in hopeful glances to the comic rack and no holiday was complete without a bumper summer special of cartoon antics, nor Christmas without a thick hardback annual. I didn’t know it then, but many of those pages were drawn by the incredible Terry Bave.

And he didn’t just draw. With the help of his wife, Sheila, Terry was responsible for creating and writing many of the strips across a golden age of children’s comics. He’s now collated a life-time of personal cartooning history into a jam-packed 300 page volume of memories, characters, strips and gags. It’s quite a formidable work, even including a lengthy list of contributions to books and comics as well as all the characters he and Sheila created.

It comes across again and again that Terry’s primary motivation was the entertainment of children. This was so much more than a job, and his love for creating quirky cartoons and fun-packed strips is there to see in every panel.

In places it’s a somewhat melancholy read as Terry records the rise and fall of children’s comics in Britain, but despite the mergers and folding of titles his enthusiasm never seems to be dented as a new opportunity was always presenting itself.

On a personal level, this book is rich in memories. I remember picking up the first issue of Wow! in a newsagent one day and I became a loyal fan for it’s entire run. I loved Wow! and in my head it’s a huge part of my childhood, and yet I learn from Terry that it lasted just a year! In fact, Terry covers its entire history in just three brief paragraphs!

It’s a book incredibly rich in nostalgia and full of passion for the medium. Anyone who has ever been touched by the fun that titles such as Whizzer & Chips and Cor! could bring will get so much joy from every page. You really can’t help but be touched by Terry’s vibrant enthusiasm for what he was doing and who he was doing it for. There are several generations of people who’ve had a richer childhood because he put pen to paper, and I firmly count myself among them.

How to get your copy: Follow the link to Lulu.com