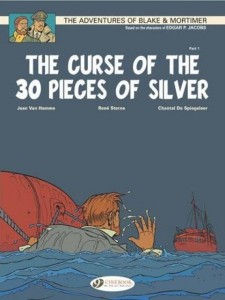 It’s been a while since I’ve read a Blake & Mortimer – entirely my fault for not making the time for it – but rather pleased that the next one on my reading list has a script by Van Hamme. These contemporary tellings of their adventures benefit from a solid back story and the benefit of hindsight, so the stories tend to be a little slicker and embrace modern sensibilities. By this I mean that not only has Olrik, that ever-present rogue, been captured but he’s doing time for his heinous actions too, so he’s a little less the pantomime villain in this one.

Not that he’s in prison for long as some band of desperadoes bust him out resulting in Blake being called across to the US to assist in his recapture. This is much to the disappointment of Mortimer who was looking forward to them both enjoying a holiday, so now on his own Mortimer finds himself at a loose end until an invitation to assist on an extraordinary archaeological dig in Greece is presented to him. Unable to resist he heads out and walks straight into a scenario that his rational scientific mind finds difficult to comprehend – a silver coin reportedly belonging to Judas Iscariot, and by extension, the potential resting place of the other 29 coins and the remains of Judas himself.

Naturally there are darker forces at work here too, which you’ll discover add a slight Indiana Jones tone to the proceedings, and inevitably Olrik is caught up in it too, albeit Van Hamme works hard to present him in a more rounded manner than we usually see him. But that means, of course, that Blake is searching for him in completely the wrong place, and Mortimer is very much on his own.

The art in this book is so incredibly pleasing to see, so alike the original books that it can’t help but stir feelings of nostalgia. Astounding work, really, and worth the price of admission on its own. However, you don’t just get the art, you get the story too, and for my money Van Hamme turns in one of the best Blake & Mortimer tales to date.

And if you liked that: You’ll be wanting to read the second part, available now from www.cinebook.com

Sketching the Coalition
The Americans Are Coming…!