At 2pm on April 1st 1960, two hundred and fifty invited cartoonists crammed into The Feathers Pub just off Fleet Street London and agreed to form The Cartoonists Club, later to be known as The Cartoonist’s Club of Great Britain.

Still going strong all these years later we were due to celebrate this weekend back on Fleet Street but world events have obviously put paid to that. We will be rearranging our Diamond Anniversary celebratory knees up for later in the year.

So by way of small celebration here’s a few 60th Birthday and Diamond anniversary cartoons from Club members (we are saving the rest for our Birthday Bash) plus a recollection of that first meeting from Les Lilley. 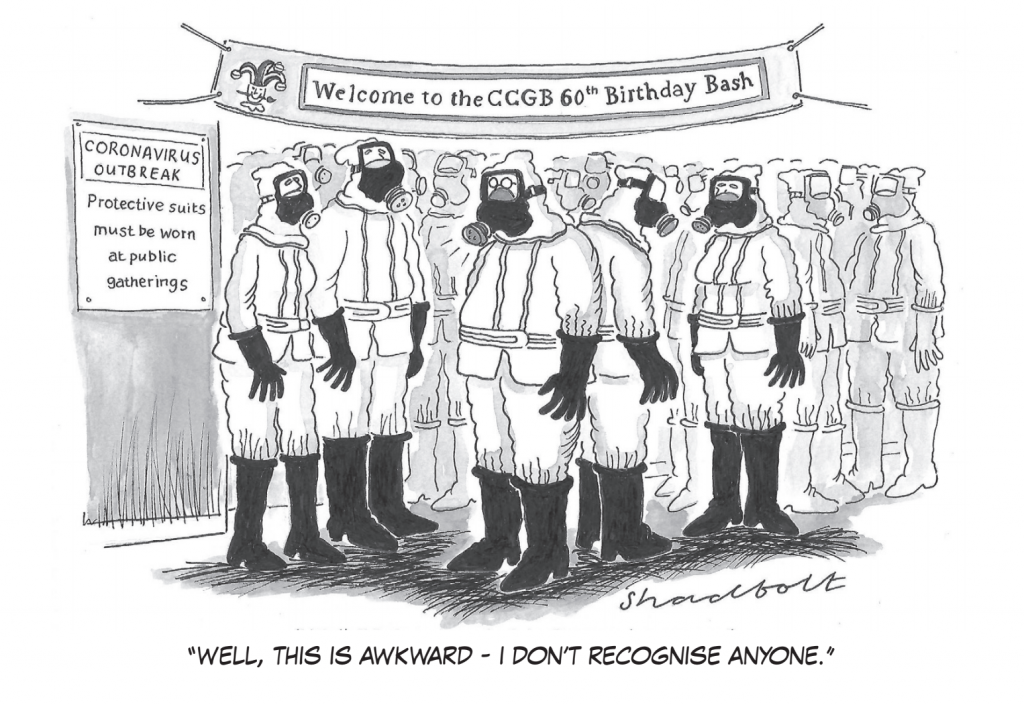 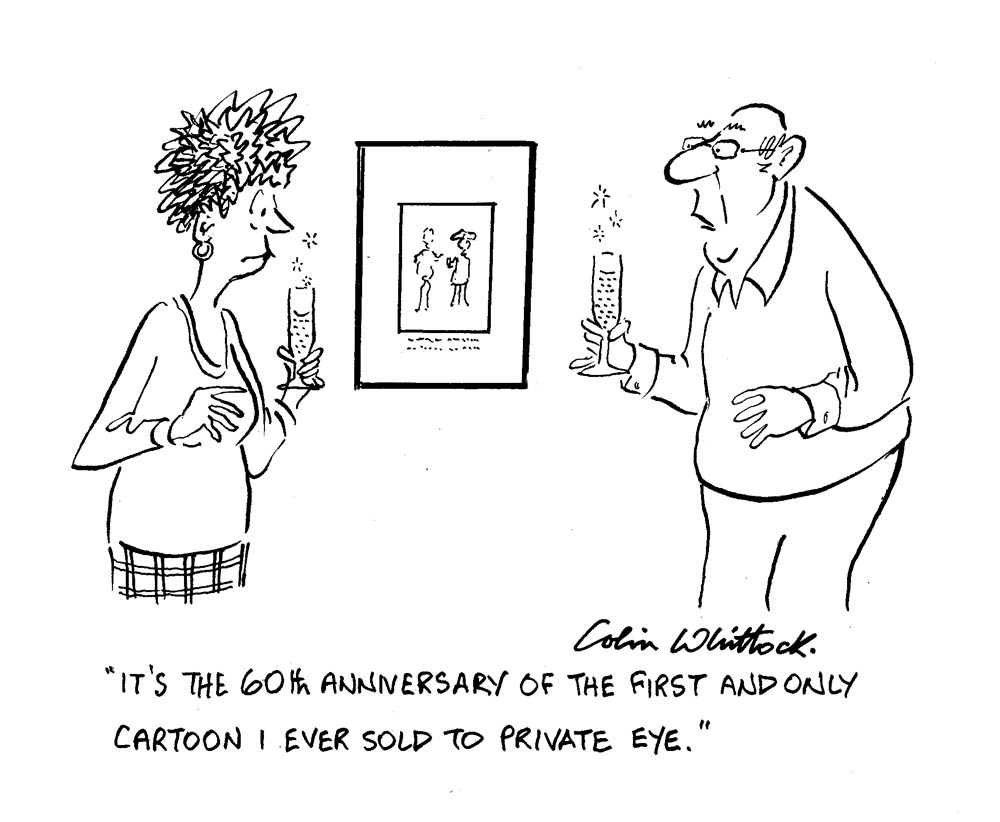 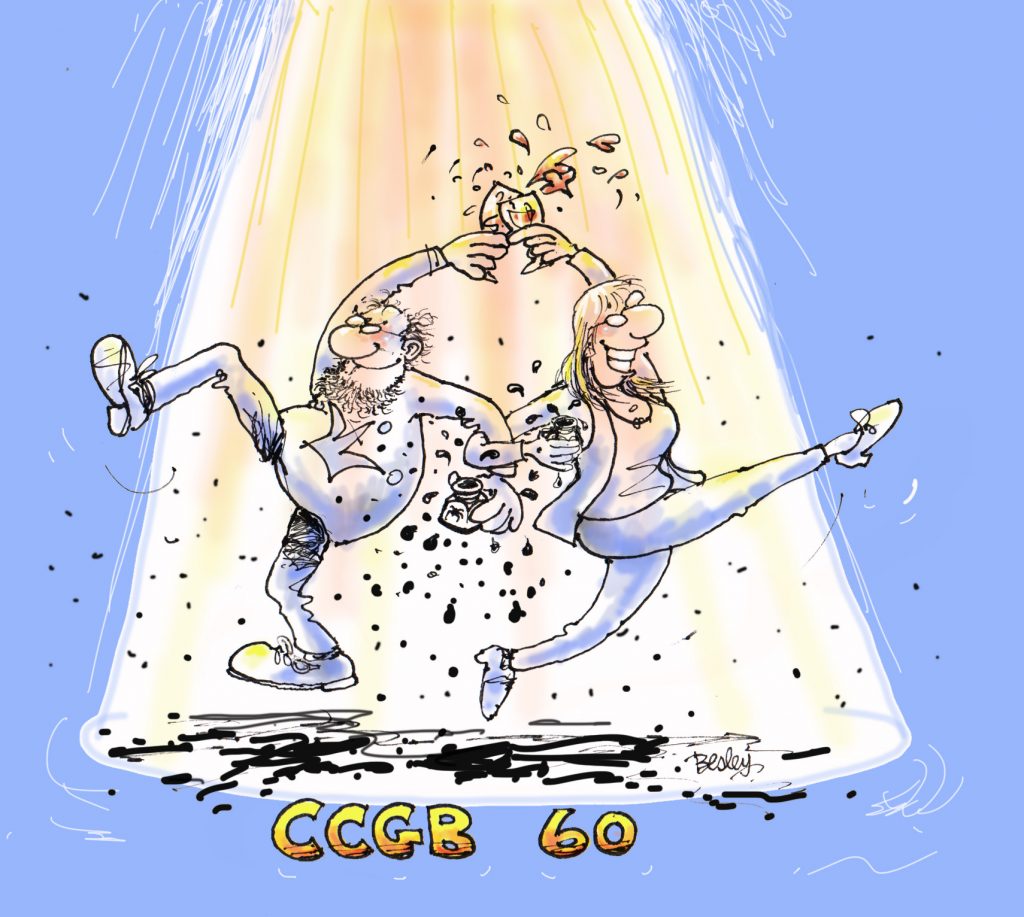 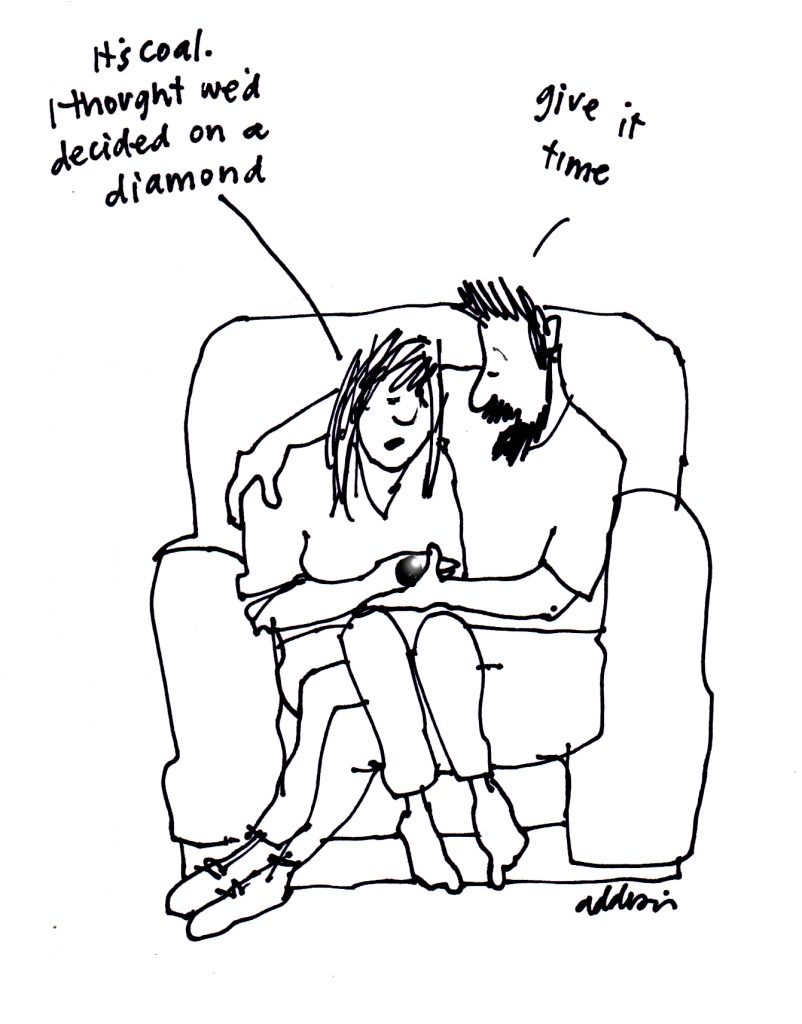 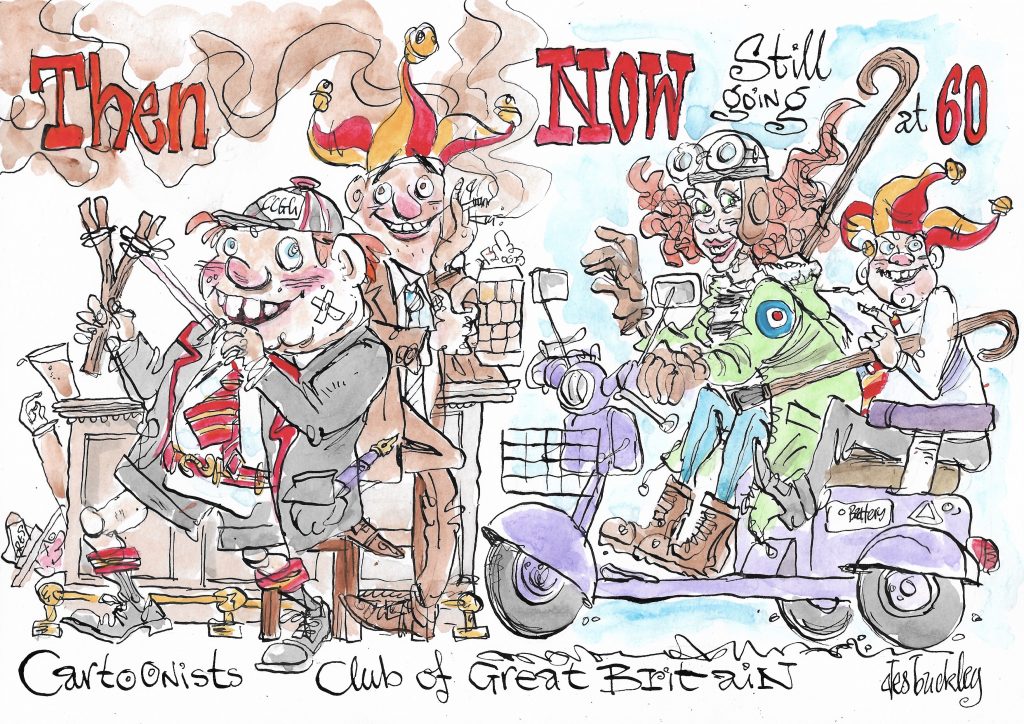 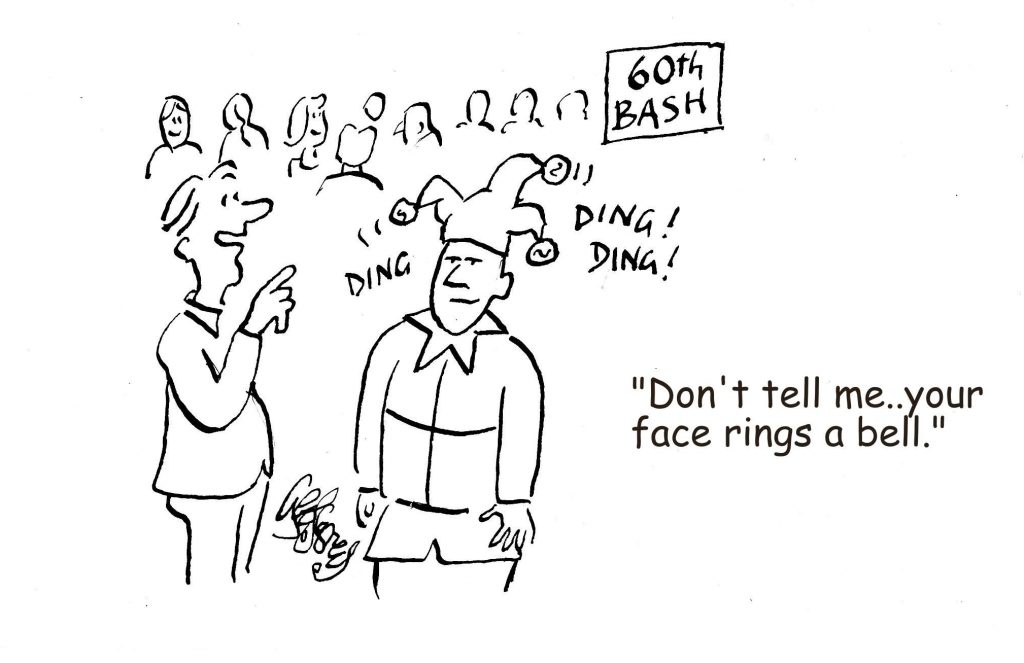 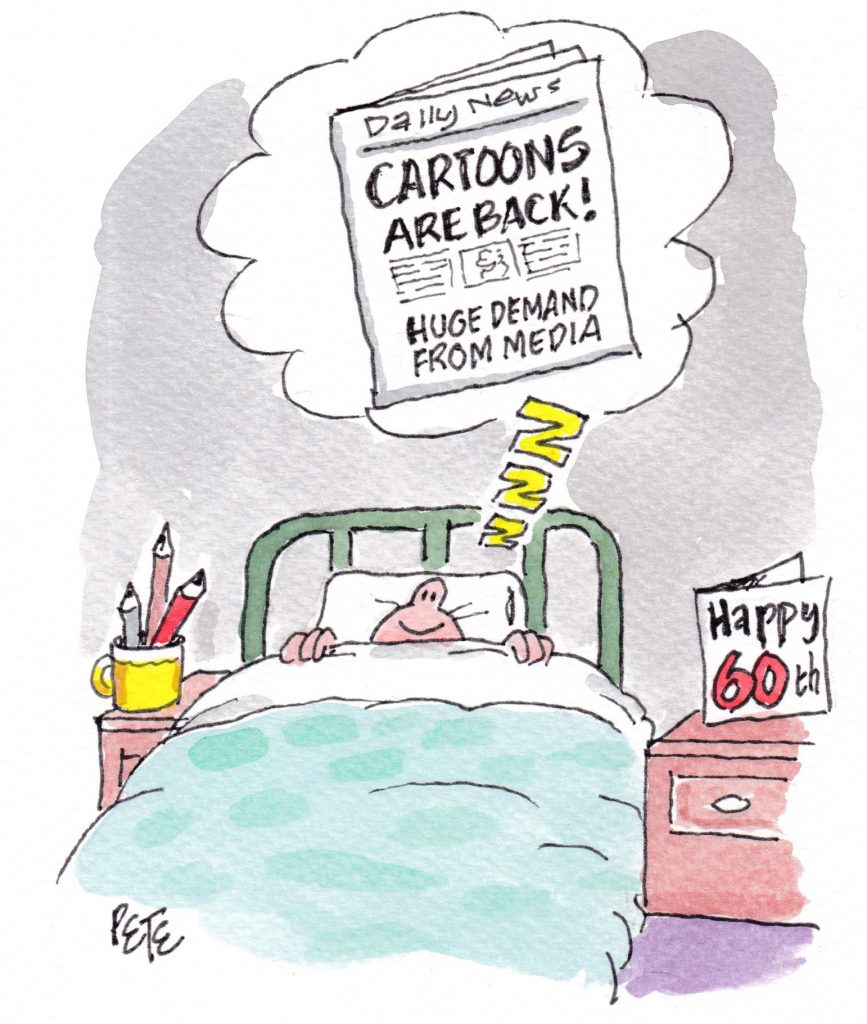 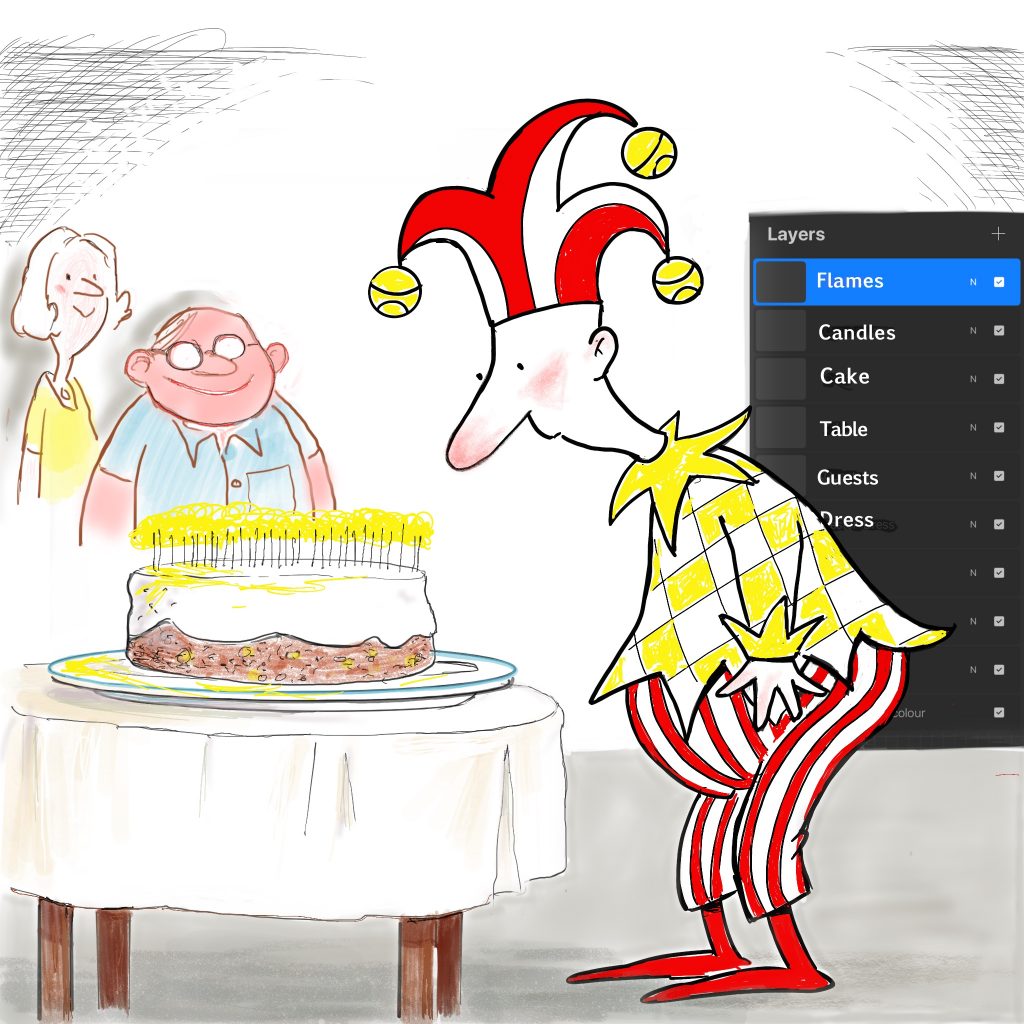 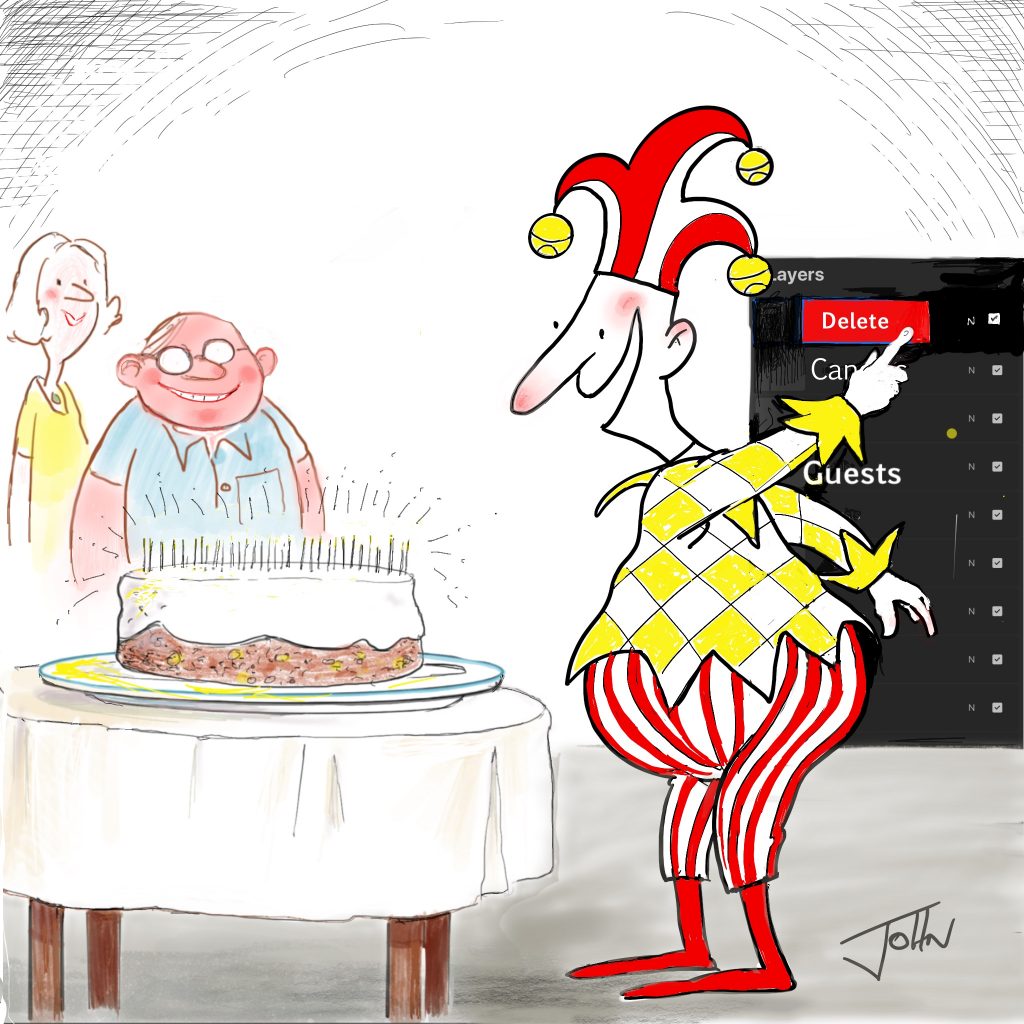 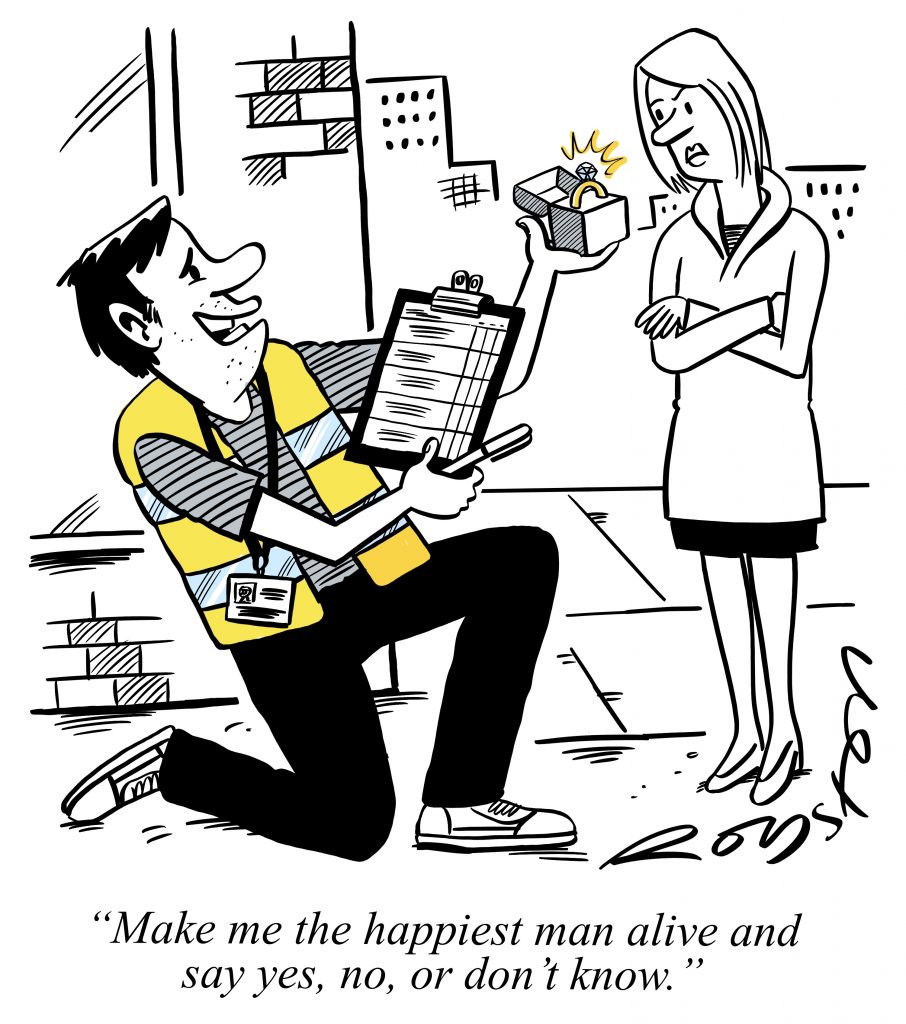 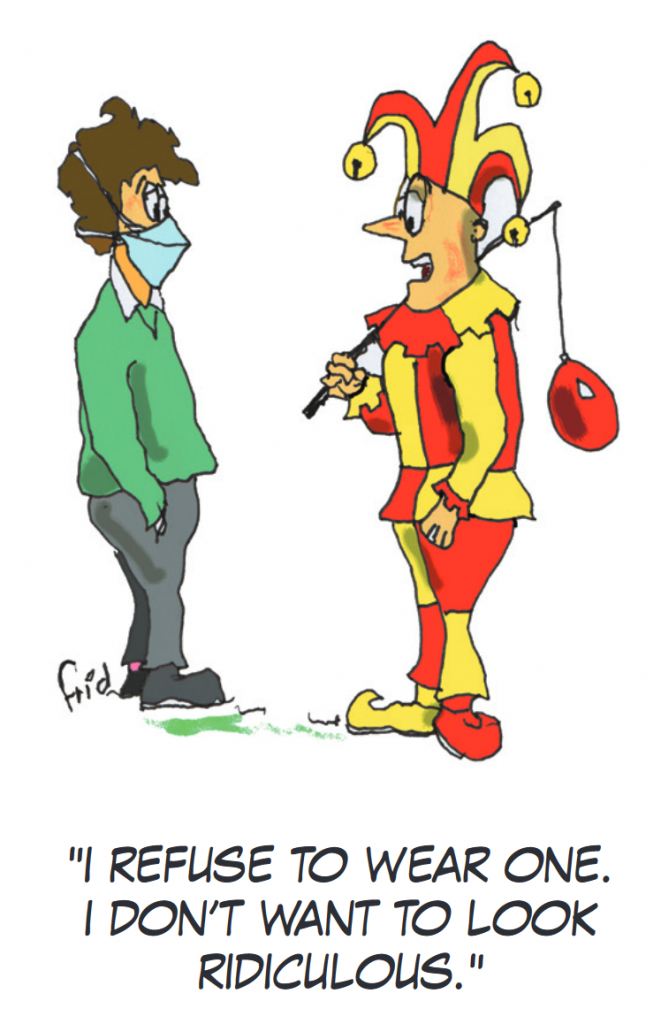 Back in 1996 Joint Founder and then Club Chairman Les Lilley recounted the history of the Club in his book ‘IT’S ALL HERE IN BLACK AND WHITE’. Presented here is the first Chapter which recalls that first meeting in 1960.

Cartoonists are solitary performers, if calling them such is not a contradiction in terms. A cartoonist will invent jokes in solitude, those published in the national press will each morning be seen by several million readers, and the combined laughter of these readers could well be loud enough to blow the roof off the London Palladium… but the cartoonists will never hear it. He or she is denied the adrenaline charge created by applause and will therefore live a life of abject insecurity, even if fully employed and handsomely rewarded.

That is the way things are today, but they were much worse before 1960 when only a few cartoonists who were under contract to papers and magazines worked in Fleet Street or its environs were known to one another. The rest of us, the small army of freelancers who lived and worked in attics throughout the length and breadth of the British Isles, wouldn’t have recognised a fellow cartoonist if he passed in the street. No one knew anyone and we all craved some sort of a club where we could spend a little time finding out how we stood in the great scheme of things.

Then sometime during either February or March of 1960, every cartoonist received a printed invitation to the inaugural meeting of a cartoonists club that was to take place at ‘The Feathers’ in Tudor Street, just off Fleet Street, at two o’clock on the afternoon of Friday, APRIL THE FIRST.

Now, what would you have thought? Probably the same as we all thought, that this was some sort of elaborate cack-handed April Fools joke. We all tossed those invitations to one side, but gradually worried about them more and more during the following days and weeks. I remember that I was eventually prompted to get in touch with the Strip and Cartoon Department at Associated Newspapers to find out if they’d heard anything about a meeting. And, lo and behold, they had. I was told by Julian Phipps, then the cartoon editor of the Sketch and Mail, that the meeting was being convened by a respected gent named Ian J Scott who, before becoming a cartoonists representative had himself been a political cartoonist on the Daily Sketch.

That was enough for me. I made arrangements for an afternoon off from my ‘proper’ job and on Friday, 1st April 1960, I armed myself with an A to Z, found Tudor Street and eventually discovered The Feathers. It was packed to the doors, heaving and filled to overflowing with one or two ladies and a vast array of ink stained gentlemen both young and old who rushed around excitedly introducing themselves and claiming undying admiration for one another’s work. There was a huge pad on an easel on which everyone from Vicky to Reggie Smythe had paused in passing to dash off a quick sketch but, apart from that, nothing much seemed to be organised. Paul White introduced himself to me and we huddled in the corner trying to pluck up enough courage to make our marks on the sketch pad.

Eventually, Ian J Scott made a short almost inaudible speech when he asked if the two hundred and fifty or so cartoonists in the bar would like him to go ahead with the formation of a club. The motion was passed unanimously and The Feathers was booked for a meeting to take place on the afternoon of the first Friday of every month from that day on. A very excited Leslie Harding (STYX) then stood on a table and made an impassioned plea in a very loud voice for volunteers to form a cartoonists cricket team of which he offered to be organiser, umpire, captain and chief scorer. This proposal was also received with great enthusiasm and agreed unanimously and that was the end of the official business.

The Cartoonists Club took off and was a huge success from that moment on. Only two things spoiled the launch. Someone walked away with the giant drawing pad and the cartoons of Vicky, David Low, Roy Davies, Norman Mansbridge, Reggie Smythe, Ian Scott, Abu, Paul White and me. It was never seen again. And Leslie Harding was never seen again, at least not at a club meeting. The cricket team remained a flight of his fervid fancy until sometime in the Seventies when a match was organised between cartoonists and the staff at Fleetway Juvenile Section. The Juvenile Section thrashed us and nary a game has been played since.

Friday afternoon meetings at The Feathers took place in a large inaccessible, attic type room with plaster walls and a board floor. As it was at least a five minute walk down to the nearest  bar, Ian Scott organised several crates of bottled beer to be left just inside the room’s door so that cartoonists could save their weary legs by helping themselves and leaving the money for it in the crate. This thoughtful facility was the cause of the club’s first great monetary loss.

We never managed to balance receipts with costs in all the meetings we had in that room. By the way, The Feathers was eventually torn down and ‘The Witness Box’ was built on the vacant site.

The late great Laurie Siggs attended a few meetings at The Feathers and it was he who urged that the club should be formalised by the adoption of a constitution and the election of a committee. When Ian Scott attempted to get a committee together he found that no one wanted to serve on it. Everyone was afraid that Fleet Street editors would think of the club as some sort of cartoonist’s union and they were all very worried about being blacklisted for being militants. It was therefore decided that a constitution should be written in legal terms that would categorise the club as social club only and contain sufficient constitutional obstacles to prevent it ever being turned into any sort of militant organisation whatsoever. The solicitor co-opted as an Honorary Member in order to achieve these ends was Alfred P Halberstam, one of the club’s greatest friends who remained with us in an advisory capacity from 1960 till his tragic death in 1995. The constitution he wrote was so good and so watertight that Ian had no more difficulty in getting names for our first ever election.

More was going on behind the scenes at the inaugural meeting than was apparent to those of us who were there by invitation. Ian Scott had invited The Duke of Bedford to our shindig and he (a great self publicist) had eagerly accepted. But somehow he got lost, stuck in a traffic jam, or otherwise delayed on his way, and the organisers, knowing that he had left home and should now be with the cartoonists, feared for his safety as hours ticked by and nothing was heard of him. The police were therefore notified of his disappearance and squad cars raced up and down the M1 looking for him. He never did arrive at the meeting but managed to earn more headlines than from actually turning up.

Our President was His Grace, The Duke of Bedford, and our Vice Presidents were Sir William Carr, Sir Edward Hulton, ‘Billy’ W.E.Butlin, Charles Forte. 11

LOVE And Other Weird Things
My Antiques Roadshow Adventure

3 Responses to Happy 60th Birthday to us!