You are here: Home › Biscuits (assorted)
By Simon Chadwick on November 7, 2020 in Reviews 0 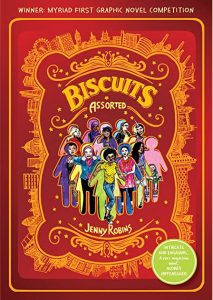 Jenny Robins won the Myriad First Graphic Novel competition back in 2018 with an extract from Biscuits (assorted). She has been diligently working on it ever since. That work went right through the early 2020 lockdown, as is reflected by aspects of the story. But it’s not just this contemporary reference that makes it feel relevant – it manages to do it through its vastly varied and captivating cast of characters too.

Biscuits (assorted) is told through a multitude of vignettes. Each is a tiny sliver of a particular woman’s life as they go about their daily routines in London. Like many capital cities, London draws people to it, from the towns and villages across the nation, and from other countries too. Naturally, these people’s paths intersect as a result. What Biscuits (assorted) sets out to do is chart a course through many of the women that live in the city, and see how their lives affect one another. Regardless of background, those interactions are many, and fascinating as the tale progresses.

Characters include Maya who has precious little social awareness, broadcasting the details of her life to all and sundry as she chats on her phone in public spaces. There’s Clara who just might have her finger on her own self-destruct button. There’s also Hana, a warm-hearted people-person who works in a supermarket and just loves to talk. And so many more.

With all these characters it could have easily failed as a narrative. However, Robins uses her skills as an illustrator to reinforce her storytelling. Not only does she manage to give each character a distinct visual look, but she further shapes their personality with snippets about their preferences, traits, worries, and joys. These in turn can reflect how that character’s story is told visually. What emerges are rounded characters with depth that the reader wants to know more about. In life, no person is a blank slate, and it’s the small defining details that make us who we are and that other people respond to. Robins uses that understanding to drive the story onwards. This ultimately rewards the reader as the characters’ lives begin to increasingly overlap.

Character development is an essential element of any creative fiction, and often takes too long to engage the reader (and with minor characters it may not happen at all). Biscuits (assorted) has no such problems. It sinks its claws in within a page of each new character introduction, and drip-feeds you revelations and relationships that build a bigger picture as the pages turn. And you’ll want to keep turning those pages. Not because of some imminent danger or pulse-racing chase scene, but because you want to know just how far Sarah is pushing herself with her illness and whether Jess will find out who Deb is.

As a first graphic novel this is a remarkable piece of work. Complex, thoughtful, daring, and at times funny. It’s a stark reminder that wherever we come from, we are all so alike, sharing the same hopes and fears, and a desire for companionship. If this book has a legacy then it should be to give people pause, and consider those around them, to serve as a reminder that they’re not all that different from you.

And if you liked that: For more great character-driven storytelling check out Chris Ware’s Rusty Brown.

Orbital Vol 8: Contacts
The Bluecoats Vol 13: Something Borrowed, Something Blue