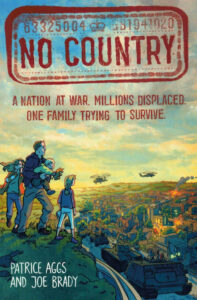 In recent years The Phoenix Comic has carved out a solid reputation as a great comic for kids. A good mix of stories, from adventure to humour, across many genres. Many of them have been collated into collections (my favourite still being Corpse Talk) and I regularly see them in school libraries when I visit schools.

But perhaps the boldest story they’ve told within those pages is No Country, of which the opening chapters comprise this new book. It’s a story of conflict, of refugees, of displacement – something that is a constant background noise to our lives via the news. Except this story isn’t happening in Syria or Myanmar. It takes place in the UK.

The Prime Minister, following losing an election, has seized power, done away with parliament, and now rules, to all intents and purposes, as a dictator. The army enforces his rule while the Free Kingdom resistance movement fights back.

We enter the story while all of this has been going on for some time. People are feeling hardship, society has broken down, food is scarce, and the threat of violence hangs over everyone. For Bea, living with her older sister, younger brother and dad, it’s all she’s really known. Her mum has made it out and is now trying to arrange for her family to follow. No easy task when everyone’s looking to escape.

Considering this is a tale aimed at children it at least denies the reader some of the more grotesque and terrible aspects of civil war, although it still remains quite hard stuff. Seen through a child’s eyes it’s more brutal and revealling for just how awful a situation it is. Both sides of the warring factions have their motivations and ordinary people are simply caught in the middle.

I’ve read many books about displacement, ethnic cleansing, and brutalities, and all are shocking and revealling but will always be strangely distant, just as watching the news or reading an article never quite bridges the disconnection between a far off land and the comfort and safety of your own home. So No Country’s triumph is cancelling that disconnect by bringing the civil war into our streets and towns and into a  home we can all recognise.

This story isn’t aimed at our age group, but you’d have to be a cold-hearted soul not to be affected by the cold realities it depicts, or be engaged by the children making sense of their torn-up existence.

Full marks to the creators for tackling such a difficult topic in such a thoughtful and striking manner. After reading it, it’s very hard to take jingoistic headlines bemoaning refugees seriously. After all, how far would you go to keep your family alive should this circumstance arise?

And if you liked that: Give Vanni a read. It follows a family’s struggle during the Sri Lankan Conflict. Beautifully drawn, and quite heartbreaking at times.