You are here: Home › Islandia Vol 2: The Westfjords
By Simon Chadwick on September 1, 2020 in Reviews 0 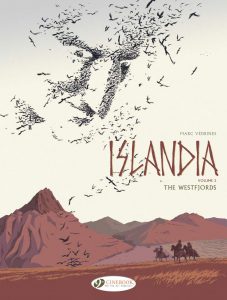 A story set in Iceland during the 17th Century is an intriguing proposition; just how do you frame a tale set against such a bleak and unforgiving landscape?

The first book showed Jacques using cunning to gain passage on a ship from mainland Europe to the remote landmass as he tried to understand his visions. Now there, he has his own personal quest but not the means or abilities to carry it out without raising suspicions. After all, why would somebody his age be looking to travel across a strange land on their own? Already this has caused disruption, and so now Jacques is attempting to stay one step ahead of the chaos he’s left behind. If he can get to the Westjfords he may find the answer’s he’s after but there will be the spectre of sorcery to contend with. The question is, is it local superstition or something more tangible.

The book has teased whether it wants to play the narrative straight. Is the populace simply too ignorant to know better, or is it presenting a reality where magic is part of the world? Several times it could have gone either way, and Védrines cleverly toys with the reader with some plausible deniability. And then goes the whole hog. I really liked the way he did it because I was just about convinced that he was going to try to explain it through rational means. Instead, when the cards are finally laid on the table, we get a community in the thrall of witchcraft, but it doesn’t end there.

Impressively, Védrines makes the most of the Icelandic landscape in Islandia. It feels remote, it feels desolate and it feels unforgiving, and the people struggling to live here have very little leeway when it comes to survival. But even more impressive is his ruthlessness with the story-telling, not least how he treats the lead character. Didn’t see that coming.

It’s another Cinebook offering that defies expectations, and, as I’ve said before, that’s what we want.

And if you liked that: Book 3 is coming soon.

Flake
The Secret Of The Aesir