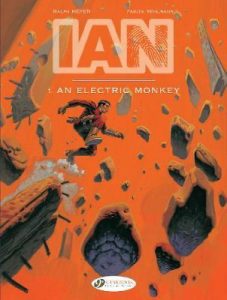 Artificial Intelligence seems to be rarely away from the news, and is certainly an increasingly common plot device across books, movies, TV, and comics. Have you noticed how to often it takes the form of an emerging sinister threat? This is natural, and perhaps inevitable. Could our fragile hold on this world be broken by a superior machine?  But AI also gives us an opportunity to tell another kind of story.  There’s the potential to reflect our humanity back upon us. Oddly, it’s a path less trodden.

In the first volume of IAN, we’re introduced to a team of rescue specialists (think grittier Thunderbirds) who are called upon to pull a group of people out of a trapped submarine beneath a nuclear dismantling factory. It’s dangerous work, made more so by the last-minute addition of an untried and untested team member. This individual is not human, but is instead an Intelligent Artificial Neuromechanoid, and naturally the team leader is far from happy.

To stir things up a little there’s also the small issue of what the sub was doing beneath the dismantling plant. You probably don’t need me to tell you that it wasn’t sightseeing. That fact that it is compromised forces the hand of those set to profit from its activities, and so before long armed mercenaries are also heading for the site. With trust already undermined, the scenario is about to get a lot worse, but fortunately there’s a sidelined AI eager to be accepted.

Sentience, and what it means to be alive, are always good fodder for a story. Here the creators attempt to mix that up by blending it with a heist in the far-flung wilderness. There are moments when we teeter on the brink of cliche but, by and large, the effort is to defy your expectations. By making Ian less gung-ho and more a victim of circumstance they come far closer to pulling it off than if they’d opted for wise-cracking hard-ass.

As is so often the case with Cinebook’s titles, the artwork is clean and detailed. Characters are easy to identify, scenes unfold with logic and action sequences take place in recognisable settings. There are still plenty of books and comics out there where the artist just isn’t given the time to realise these things effectively so I always think this worth celebrating.

There are more IAN books so it remains to be seen where the creators will take this exploration of humanity. I’ll let you know what I think when I get there.

And if you liked that: IAN book 2 is out now.