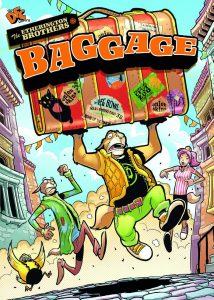 This review appeared in Issue 532 of the Jester Magazine, July 2019

The Etherington Brothers were born two decades too late. Although benefiting from the inspirational material they grew up on, the market they so completely excel in is but a shadow of its former self, with many a nipper, skuinny and pipsqueak distracted by YouTube Fail videos, Fortnite and Minecraft rather than enjoying a ruddy good comic.

Baggage is one of the earliest efforts, created for the forerunner of The Phoenix comic. It’s packed full of lovely beautifully drawn art with a madcap story of a lost property officer given just a day to reunite a suitcase with its owner. The catch is that the suitcase is the oldest piece of lost property they have.

Clearly having a whale of a time in its execution, the brothers have pushed the boat out to make it as silly and over-the-top as possible without jeapardising the story. Perhaps it’s because they’re brothers that they have an incredible synergy on the page, almost riffing off one another’s strengths to create gloriously detailed panels in vibrant full colour, each draughted perfectly to maximise the comic potential of the tale.

What’s particularly nice about this book is that it’s been produced in a size something akin to the European album format, unlike their later books which for some bizarre reason were shrunk down, thus destroying much of the fine detail. There really is a lot to appreciate. 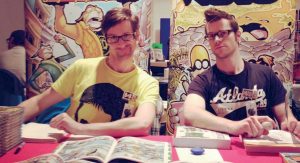 The Etherington Brothers: Left is the scribe, Robin, while right is Lorenzo, the cartoonist

Although it’s been out a few years now you can still track a copy down. And if anyone’s interested in improving their drawing skills, Lorenzo creates some fantastic simple tutorials that are extremely helpful. Follow them on social media or Google them to find out more.

And if you liked that: You may also like Long Gone Don.