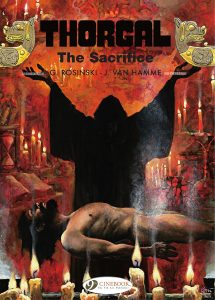 I’ve written enough of these now to make it quite plain as to how much I enjoy the Thorgal books, and so it’s with a tinge of sadness that this appears to be the final book of the main story arc. That doesn’t mean to say that there aren’t more to follow, but it looks as if this is the end of an era, not least because Van Hamme is relinquishing the writing. What that means, though, is an ending, of sorts, that ties up a few loose ends, brings some closure and reintroduces some characters not seen for some while.

Thorgal’s lying close to death and Aaricia and the children are desperate for help, food and shelter. Shunned by a local lord all appears to be lost until the shape-shifting minor god Vigrid appears to repay a favour incurred many, many years before. Unfortunately he is only a minor god, and his hands are further tied by Odin’s wrath. But not all is lost and Vigrid announces that he can revive Thorgal for just two days in which time he must seek his own salvation while Aaricia and the children are transported by a magical craft to their home village. All in all a good plan, but one that goes instantly awry as Jolan is carried skyward along with Thorgal as the healing quest begins.

Van Hamme is using this book to settle Thorgal’s narrative and build up Jolan’s, but he’s thoughtful enough not to make Jolan a carbon copy of the titular hero. He’s younger, more naive, less experienced, but he also embodies a determination and a willingness to learn that sets him on the right course. When the time does come for his own heroic sacrifice it sits perfectly within the framework of the story.

Rosinski still appears to be having a ball with the artwork, flitting between myth and science fiction, strange worlds and unearthly beasts with ease, covering a host of seasons alone with this one volume. It’s good to see he’s sticking around for the upcoming books.

In some ways a melancholy ending, and in others a bright and optimistic new beginning, but regardless this has been an excellent on-going series. One that deserves a home on your bookshelf.

And if you liked that: Jolan’s tales begin with book 22, coming soon