You are here: Home › How it all began! – Alex Matthews
By Cartoonists Club on October 8, 2014 in Articles, The Jester 0

How fellow club members got started in the wonderful world of Cartooning! This article first appeared in The Jester issue 460. 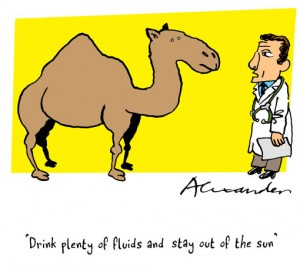 My training ground in cartooning was the back of the family car. My father used to take us on driving holidays across Europe every year and to occupy my brother Austin and I, my mother used to buy us a stack of comics: Beanos and Busters and Whizzer and Chipses and Nuttys and Dandys and best of all, Oinkses; Summer Specials and Comic Libraries and Annuals and Asterix and Tintin books. Once those were devoured before we’d even reached Dover, we’d get the A4 and the pencils out and draw our own comics, beginning with the front cover topped with a ludicrous name, adorned with allusions to non-existent free gifts and priced imaginatively anywhere between one nanopence and 300 Bazillion Space Groats.

We’d produce literally hundreds of strips, trying to better each others jokes and insane character ideas. Favourite characters I recall include Mantovani’s Minto Farmo, about the conductor who had switched careers to become a mint farmer (not much scope for stories with that one), Pee Ploppy Poo Pah and his Magic Guitar (sophisticated humour it wasn’t), The Incredible Adventures of the Amazing Mr Frosty, an adventurer in a top hat who would begin each strip in an impossible situation set up from a cliff hanger in a non-existent previous episode. There was ‘The Further Adventures of Bingo Gringo’, a mexican bingo loving detective, ‘Pope Gyroscope, the Twirling Ecclesiast’, and millions more. 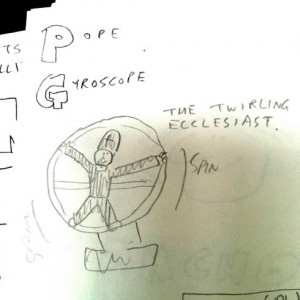 Our love of football and comics dovetailed into our magnum opus, a 200 odd episode strip about a football team called ‘Duford Rovers’ (The name was derived from dufus). I still recall the first episode, created by my brother, ‘Manager J. Smith surveyed his team…’ There then followed a picture of each member of the team: There was a player who was dead and was essentially just a coffin, a goalkeeper with no arms and legs, who was eventually superseded by a player who had swallowed and was the same shape as an articulated lorry, a player who had been turned into a dog by a wizard, a player who’s half a body was fused to an office chair. It was sub Billy The Fish stuff, but it had little to do with parodying the odd, cliché ridden world of football and was more an exercise in extreme surrealism. The last line of that first episode was ‘…they played like a dream.’ 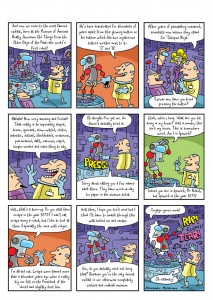 We’d set up a cliff-hanger and it was my or my brother’s task to first extricate the team from the situation before setting up the next cliff hanger. Sadly, big school got in the way after about episode 200 and our minds turned to more grown-up endeavours. In my case, like reading 2000AD. My younger brother didn’t have quite the passion for comics I did and while I aimed towards a career in drawing for a living and just about surviving, he has ended up being well paid for impenetrable financial stuff, is married with two kids and owns a house. Sad, really. A great loss to the world of comics as he was always much funnier than I was.

At about the age of 12 I decided firmly that I would be an illustrator. It wasn’t until 9 years later, having graduated with a degree in illustration, that I decided that being an illustrator was exactly not what I wanted to do with my life. Drawing other people’s ideas in a deliberately annoying and obtuse style simply wasn’t me. So I trained to be a teacher and spent 6 sometimes happy years in schools in London. 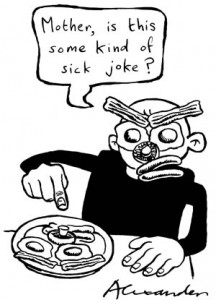 One year, early in my teaching career, I entered the Guardian’s editorial cartoon competition. It was the election with Tony Blair, Michael Howard and Charles Kennedy. My cartoon was published in the Guardian to advertise the competition and I started to wonder whether I couldn’t have a crack at cartooning again. I stumbled across Cartoonstock on the internet and gathered together a few published cartoony illustrations and strips and sent them off. Joel Mishon of Cartoonstock, bless his heart, gave me some very positive feedback but suggested I take a crack at some regular gag cartoons.

Amazingly I’d never really considered gag cartooning and had barely read one. I had this idea that they were just not funny. I immersed myself in them, fell in love and then sat down and produced about 30, which he took. You can still find them on the site. They are the surreal ones that aren’t that funny. Next I set about getting published which took way too many months. My first sale came about due to extreme frustration at the lack of success I was having with Private Eye and the like. I sent a batch off to The Weekly News and they took one in return for a mind-bogglingly pathetic £12.50 cheque. After a year I placed one in Reader’s Digest and then another year later, I sold one to Private Eye. A month later I sold three from the same batch. I figured that if this trend was to continue, I would end up selling more cartoons than there were atoms in the universe every week. Sadly it didn’t, and getting a gag cartoon published is still a struggle! Not for anyone else of course, who manage to get any old rubbish published. There’s a conspiracy against me, you see. 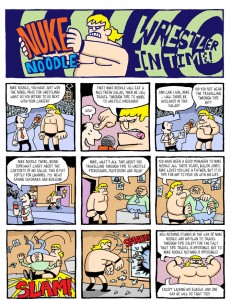 After a brief 5 year stint as a lecturer in illustration in Moscow, I find myself working full-time in London as a cartoonist, drawing regularly for the Dandy and very soon I’ll have my first Beano strip published. All that writing when I was a child stood me in good stead it seems, as I find that producing a page for a children’s comic is second nature. Sadly the Dandy seems doomed, but I am proud to have contributed the strips ‘Robot on the Run’, Grrrls!, and ‘Nuke Noodle’-my new magnum opus: 59 pages to date of time-travelling wrestler nonsense. Nuke has even managed to rekindle a long-dormant love of kids’ comics in my brother. In the past year the writing has taken over and I am particularly proud of the strip ‘Useleus’, about the world’s worst Greek hero, drawn by the brilliant Wilbur Dawbarn and appearing from time to time in the Phoenix comic. Which reminds me, I must crack on with the next episode…

Lady S Vol 4: A Mole In DC
How Do You Do That Then? – Vanishing Point