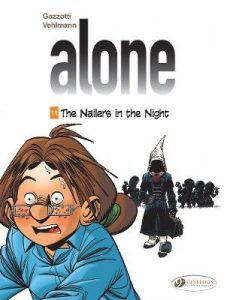 This one’s a shocker.

Gazzotti and Vehlmann have crafted an interesting premise with their series to date. As the characters have come to understand the reality of their situation the creators have expanded upon how such a world could exist, teasing the rules by which everyone must adapt to live by. By far the most fascinating aspect that’s being explored is death. This isn’t quite as final as one might expect. But there are implications for such a rule, and some other strange associated phenomena. And it’s poor Ivan who is about to find out just what that means.

Fending for himself in a coastal town, Ivan is very much alone. Separated from his friends, he’s making the most of his situation as he plans his next move. So it comes as something of a shock to be paid a visit by a changed Camille, and she’s not there to help. His defiance towards her means he must face a new threat, the Nailers, and one called the Mender.

What follows is both eerie and a little disturbing, but once again Gazzotti and Vehlmann tread a careful path. This is, without a doubt, horror, albeit bloodless. This series is aimed at a younger audience, but, I think it’s easier to think of it as aimed at a family audience. You’ll still enjoy it if you’re older. The creators manage to balance the tone and the shocks just right for the audience, and you just can’t help be swept along.

There are other story threads here too, following some of the other characters. It’s just to remind you at what point they are in their own little narratives. Some threads, though, span off several books ago now, so I for one struggled to recall exactly what was going on. Fortunately, a re-read of past books is easy to do.

Alone remains a first-class series, largely because its creators know their audience and are writing for them. The design, the atmosphere, and the characters are consistent, and the tension and the mystery continue to build. Here’s hoping they can keep up the momentum because the first eleven books have been quite a journey.

And if you liked that: Book 12 is coming soon