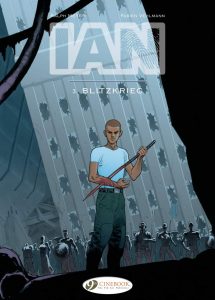 Starting off like a grittier version of International Rescue, my initial expectation was that we were on for a series of hi-octane rescue adventures in improbable places. But IAN’s not been like that at all. Instead, it’s a deeper exploration into ‘self’, with questions of who we are and how we fit into the world. Or, as with IAN’s case, being unable to find that fit. Just where does that leave you in the great scheme of things?

IAN’s inner crisis is further complicated by his actions in LA during the rioting. He’s responsible for a massacre. He’s questioning his own sanity. And he feels very much alone. The obvious answer, as he sees it, is to remove himself from the equation, but when you’re an android even that proves to be a difficult endeavour. Ending in failure, IAN finds himself amongst new people, unaware of his robotic origins and all of them disgruntled by the rise of robotic workers.

Meanwhile, the rest of the team is at the Pentagon where they meet an unusually young general hellbent on taking down IAN. Before long IAN is on the run, battling against an enhanced human and fighting to understand the entity that haunts his mind.

The creators are setting up an interesting juxtaposition. A robot that, to all external eyes, appears human and is the embodiment of compassion and thoughtfulness. And an enhanced human that expresses all the ruthlessness and single-mindedness of a cold machine. It’s an exploration into intelligence, empathy and survival. What is it about those things that make us human? Does displaying and acting upon human values and fears constitute being alive?

With each new book this series has grown on me. Had Meyer and Vehlmann opted to portray IAN more like something from Terminator, possessed of a single-minded determination or as an unrelenting bad-ass then I think this would have failed. Fortunately, they chose otherwise, and the result remains compelling and mysterious.

And if you liked that: Volume 4 on its way soon

A Guide To Zookie The Dragon
Giles The Collection 2020