You are here: Home › A Not-Quite-How-To Guide On Not Making Money As A Cartoonist
By Anna Kane on January 24, 2020 in Articles 0 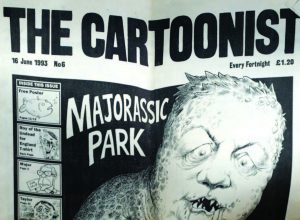 It’s 4.55am, it’s press  day on that architectural magazine title you’re employed at, but all you can think about for the last few broken hours of sleep is the gag. That speech from Theresa May, that episode of Question Time, that toon that is swirling around and around in your head like a broken record; when is it acceptable to get the iPad out?

And so begins another day in the last 30 years working in publishing as a Production Manager, when what drives you and makes you come alive is putting pen to paper! “Just face facts, Pete, you’re a cartoonist, live with it.” But am I? A quick scout around online leaves little doubt there’s a world out there of the already successful, and in many ways far more talented. Can I find a niche? And taking an abhorrent phrase from the 90s, can I ‘monetize it?’ I get that idea is not for everyone and for most it’s a hobby; for me, though, I feel it needs to be more. The journey begins.

Now, to start with, I come at this world with a good working knowledge of cartoons in print and, despite a career in magazine publishing, not too much to show for that time in artistic ventures. The odd free-to-use illustration to ‘jazz up’ a text-laden article on subjects most readers would just avoid. Making leaving cards for colleagues. (You’re so talented! You should do that for a living.)

If it was down to me, and I had the funds, I would just bring back The Cartoonist newspaper from the early 90s and pay everyone handsomely for their work. How I still miss that fortnightly hit of satire. However, that’s a pipe dream, of course. The reality in this journey is finding a home for my artwork.

So where to next? I start at the top with a quick stab at procartoonists.org, which left me wounded. Despite a career being in the right place, my few attempts at work in print were not enough to warrant that particular badge. Thankfully I found one in The Jester that fits! However, despite the honour, which I actually wear, this little accolade doesn’t enhance the bank balance. 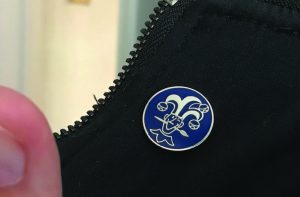 Social Media is another avenue. “Just get yourself out there, Pete!”

Twitter: Feed gone in seconds and how many @’s and #tags before you start to lose the will?

Facebook: Do I really want to subject my actual friends to my ‘weirdness’?

Instagram: A possibility, though you have to have the artwork on your phone or an app called Droplet on your desktop. Oh, and an actual audience.

I try local and national media, and lastly Private Eye who will happily take ideas and actually respond; see the headline above from them to me for the past four months.

The Spectator, similarly, take submissions; however, they don’t acknowledge anything, at least not to me. National media is a drop in the ocean – likewise local media who have seriously constrained budgets. I’ve found that the best place to find contacts for these can be found at https://media. info/uk/newspapers

A Penny For Your Thoughts

I arrive at the door of The Greeting Card Industry, which is vast; though a potential way of getting cash for your work. The Greeting Card Association seems to be the place to start looking, and they have links to publishers who are looking for artists at http://www. greetingcardassociation. org.uk/resources/for- artists/publishers-looking- for-artists

This is an extremely competitive area for artists, of course, but it looks like one good site to exist on, whilst giving some proceeds to charity, is Doodle Doo. Essentially, you come up with the artwork and, if your card is chosen, you get a small percentage of the proceeds. Small beer, but a start! There are others out there like Thortful.com but they have a stronger filter in terms of style and quality, if you don’t fit what they want you only appear in the ‘classifieds’ (not up the front of the site) so revenue potential is minimal.

There’s also further afield, for example, the American market, to consider, at Oatmeal Studios (if they get the British wit, of course!) 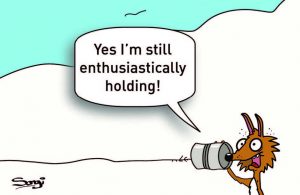 Holding on the line

At this point in proceedings I look into the mirror and ask, “Is it worth it, Pete?”

My somewhat-deflated reflection encourages me. “There are still options! You can still sell your cartoons and illustrations on stock photo sites like iStock and cartoonstock.com. It’s a large puddle to swim in, but what’s better then waking up to a sale?”

“You’re right!” I tell him. (I confess to not actually making it on there yet as the contact system is less than communicative, but again, worth a try?)

A final solution, and where I currently find myself, are Point of Sale sites where your artwork is put on merchandise such as greeting cards, mugs, T-shirts – you name it – and put up for sale. If somebody buys it you get a percentage. Zazzle are one of the most popular.

Ownership is a big deal to many, but if you can’t get what you want from who you want you may have to make your own luck. If that means some bloke in Holland wearing a Foxy T-shirt, then so be it!

I’m off to do a cartoon for Jester before deadline and apply again for my annual attempt at Pro Cartoonists. They’ll say yes eventually! Watch this space.

Valerian & Laureline Vol 23: The Future Is Waiting
The Wolf Of Baghdad