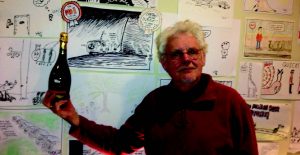 Noel wins cartoon of the week at one of the many Malta Mini-Cons. He was always equally surprised and delighted when his cartoon finished in the top three despite being the most experienced cartoonist there.

Noel’s funeral was on 16 October 2019 in Hereford. Our very own Paul Hardman oversaw the service and it couldn’t have been better. You did good, Paul.

Pete Dredge was asked to deliver the eulogy, reproduced here, and, like with Paul, I’m sure Noel would have been delighted:

I can’t remember the first time I met Noel. It must’ve been well over 40 years ago, probably at a Cartoonists Club convention at Clacton on Sea in 1977. Who said cartooning was a glamorous life? But I can remember when I first came across his work. I had only recently left art college and was working as a third rate illustrator in a Leicestershire design studio.

My dad worked in the drinks industry, he was a rep for Gordons Gin, and on his travels, he was given the latest Guinness cartoon calendar for 1976 and passed it on to me knowing that I harboured a distant ambition of becoming a cartoonist. It was full of brilliant cartoons by someone called Noel Ford. 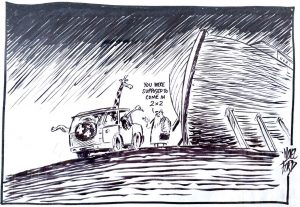 I had also been a regular reader of Punch magazine for a number of years. I say ‘reader’, I didn’t read the articles, it was the many fabulous cartoons by brilliant cartoonists that I poured over. Bill Tidy, Mike Williams, Larry, Honeysett, Albert, Ed McLachlan, Hector Breeze, Ray Lowry… I could go on. Then this Noel Ford chap’s work suddenly started to appear with alarming regularity. Gags, double-page spreads and colour covers all fabulously drawn with that distinctive NOEL FORD signature.

Noel always went on about how your clear, legible signature was the best, free advertising for your work. A simple, basic lesson I have failed to learn in over 40 years of cartooning. Suitably inspired, it wasn’t long after that that I decided to make a concerted effort to become a cartoonist myself and it was the biggest thrill of my life when Punch started to buy my work, too. I’ve been floundering in Noel’s slipstream ever since.

Noel was a modest chap, never one to blow his own trumpet (although, with his musical talent, this would probably not have been a difficult task to undertake). But he was someone who would go about his business with the supreme confidence of knowing that he was, and had been for many years, at the top of his game.

It’s pointless listing Noel’s professional credits, there are too many to mention, but one of his many gifts was his ability to rally, organise and deliver cartoonist-related projects. A professional cat herder if ever there was one.

All it would take would be a few choice words from Noel and troubled waters would be smoothed over. Such was the respect that his fellow professionals had for him. 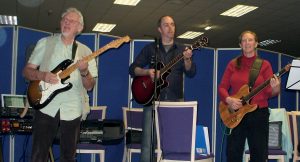 CCGB get-togethers often meant an excuse for getting musical instruments out. This one was taken at our Butlin’s get-together almost ten years ago. Noel’s joined by Tim Harries and Bren Romans.

The Cartoonists’ Guild, College of Cartoon Art, and most successfully The Professional Cartoonists’ Organisation, all benefited hugely from Noel’s vision, perseverance and professionalism. Without Noel’s input it’s extremely doubtful that many of these initiatives would’ve seen the light of day.

Added to this must be his invaluable committee work not only on the long-running Shrewsbury Cartoon Festival but also on the committee of the Cartoonists’ Club of Great Britain where he had been a member since 1972 and recently become chair.

Noel certainly put in much more than he took out with these extracurricular calls of duty.

Noel’s sublime organising skills also came into play with one of his other great passions in life, food. Not the preparing of but the consuming of it.

One of the cartoon festivals we used to attend in the late 1990s was up in Ayr in Scotland. We would be ferried up to Glasgow by Virgin Trains and then the local service to Ayr and then on to the Horizon Hotel.

The highlight of the event would happen on the last evening when the organiser, a lovely bloke called John Hamilton, would book out the Royal Blossom, Ayr’s finest Chinese Restaurant. Noel and one or two others (Dave Follows and Paul Hardman come to mind) had been attending this long-running festival since the first year and had sussed out that the best place to sit in this restaurant was at the revolving table (the Lazy Susan is what I believe they’re called). At this table all you had to do was wait for the many courses of mouthwatering Oriental dishes to come to you rather than fight for your share on the other more conventional dining tables.

Every year, while other less well-informed cartoonists would mill about like lost children waiting to be seated, Noel and his select band of co-conspirators (myself included) would push through the crowd and make a beeline for the best seats in the house and gorge ourselves silly over the next three hours or so.

Noel could always find humour in the most unlikely situations and I suspect that he persuaded Margaret to move to their lovely home at Hope in Dinsmore just so that he could say: “We now live in Hope.”

Given the current political climate, I didn’t know if Noel was a remainer or leaver but, given the love he had for his many canine friends over the years, I suspect he was a retriever!

I last spoke to Noel about two weeks before he passed away. I took a call from his hospital bed. He asked if I could complete a cartoon for one of his long-standing clients. He couldn’t hold a pen and didn’t want to let the editor down.

I was sitting outside a referral opthalmic veterinary practice in Sunderland at the time. Our dog had just undergone bilateral cataract surgery and Noel was more concerned about the welfare of our dog than he was about his own wellbeing.

Thanks for the memories, Noel Ford. We’ll all miss your Muttley-like chuckle. You’ll be greatly missed not only by your family and friends but also by the wider cartoonist community at home and abroad. See you anon. 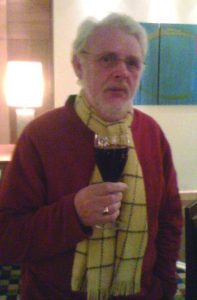 Not a brilliant photo, but a fond memory all the same.It was my first CCGB event – in Milton Keynes! The plan was for everyone to dress as their favourite comic or cartoon character one evening, but for some reason the only person who managed to do it was Noel.Despite his room being a short distance away he remained in Rupert regalia for the entire evening, taking very good care of the large glasses of red wine placed in his care.