You are here: Home › Distant Worlds Episode 1
By Simon Chadwick on November 18, 2018 in Reviews 0 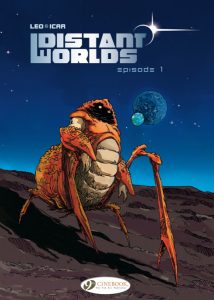 Rather splendidly, there’s a new Leo book out, and like Aldebaran it’s set on a distant colony world struggling to find its feet.

It begins with the arrival of a mother and her two young adult children, summoned to Altair-3 by the husband and father they’ve all seen so little of. When they leave the spaceport, however, he’s not there to meet them, and they’re forced to take up local lodgings and hunt for paid work before their meagre resources run out. During this time they run into trouble with some of the more dangerous locals only to be rescued by a Stepanerk, an impressive alien that looks like a cross between a spider and a crayfish. The Stepanerk is resourceful, intelligent and capable, and sees to it that the family are returned to safety where it learns of the children’s missing father. It aids Paul, the son, in learning something of his father’s whereabouts, but in order to seek him out these two unlikely companions must travel to another continent in this unusual new world.

So typical of Leo’s tales, this is a story of exploration, bizarre creatures and fascinating sci-fi concepts, not to mention a look at what makes us human. But along for the ride this time is one of the most bizarre creature designs in the genre, a leggy, brooding, mysterious, giant prawn. At first glance I thought this really wasn’t going to work, but along with the strange look they’ve managed to invest it with a personality that utterly fits. It’s not subservient or bedecked with weapons, nor after riches or on a mission; it’s simply after knowledge and intrigued by the new, so as a travelling companion it’s perfect company, and possesses a moral centre that places it on the side of the good guys from its first appearance.

Come the final page I’m rooting for them both and already hungry for the next episode. Leo has a habit of doing that. Looking forward to where this story takes us next.

And if you liked that: Any of the Worlds of Aldebaran books will see you satisfied