You are here: Home › Long Gone Don And The Terror-cotta Army
By Simon Chadwick on January 11, 2017 in Reviews 0 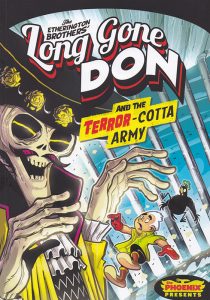 Don Skelton is back. After kicking the bucket following an unplanned soup inhalation Don finds himself in a surreal afterlife of utter oddness known as Broilerdoom. After seeing off the evil machinations of Spode, the demon ruler of Corpse City, in the previous book, Don’s now got new problems, new friends and a brand new enemy.

Somebody is stealing the totems from the inhabitants of the city’s slums, rendering them deranged and even odder than normal. Meanwhile, the leviathan worm known as Thanatos has had his heart stolen, literally. A despicable plot has been hatched and Don’s squarely in the middle of it. Don’s best pal, the crow Castanet, leads them to his brother where at least part of the devious goings-on are revealed, but things are set to get a lot worse before they get better.

So that’s the general outline, without giving too much away, and to further whet your appetite, consider these little nuggets. Long Don Gone features in the exemplary British comic The Phoenix, voted No 2 in Time Magazine’s global list of ’Top Comics and Graphic Novels’. It’s packed full of good stuff, not least the creations of the Etherington Brothers, Robin (the scribe) and Lorenzo (the doodler). The pair of them bring a fantabulous amount of zest, humour, silliness and adventure, all delivered with gusto. They clearly love comics, understand their audience, and have a huge amount of love and respect for their craft.

The absolute icing on the cake is Lorenzo’s outstanding artwork. I’m struggling to think of anyone who draws with such exuberance, detail and sense of fun. A clear influence is Albert Uderzo, as there are some lovely nods to Asterix-style temper tantrums on display, but while Uderzo’s artwork was tempered by the what could be reproduced on the printed page at the time, Lorenzo has the opportunity to let every page, every panel, shine, with outstanding painted art that enriches every spread. In my book he’s one of the greatest talents in the world of comics.

The only criticism is that the artwork is so detailed and so rich in colour that it deserves the Franco-Belgian album size to really do it justice. That’s not to say you won’t still be wowed by it, but perhaps larger editions could be considered further down the line.

So if I’ve not been clear, this is a great book that originally featured in a great comic, by two great talents, so you wouldn’t want to miss out on that, would you.

And if you liked that: Get your copy from www.thephoenixcomic.co.uk and check out a whole host of great Etherington Brothers goodness at theetheringtonbrothers.blogspot.co.uk

Good For Kids, Humour, The Phoenix