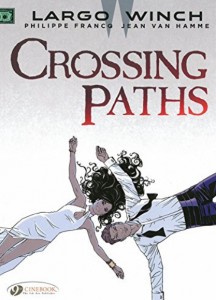 The latest outing for Largo sees the adventure move to the streets of London, beginning with a bombing in an elderly couple’s Chelsea property and some cloak and dagger goings-on on a flight into Heathrow.

Largo’s closest allies are joining him in London for a little rest and recuperation before a big board meeting, but also in the city is Largo’s artist friend Domenica who is exhibiting her work there.

Largo’s entourage have time on their hands, so it’s not long before Penny has run into an old boyfriend from her school days and Cochrane is finding himself absorbed by the attentions of a stand-in secretary, leaving only Silky without some companionship. Meanwhile Dominica has taken a young woman under her wing who, to us, is blatantly not what she seems. The trouble is, nobody appears to be quite what they seem, and the common denominator in all of it is Largo.

Van Hamme keeps us guessing, using an Islamist cell, some Chinese industrial espionage, and even the CIA to keep us second guessing who’s on the side of the good guys, who is playing who, and, ultimately, what do they plan to achieve,

We also get a bit of Van Hamme cross-pollination as a character from another of his books steps across into this one as Largo aims to recruit him as part of the team. Naturally, we’ll now want to be reading that one…

Van Hamme’s scripts are always a guarantee of a good thriller, but the Largo series really comes into it’s own under the illustrative excellence of Philippe Francq who just seems to be able to draw just about anything that’s thrown at him. The opening page alone, from it’s accurately depicted Chelsea terrace to the gargantuan explosion underline his versatility, and show what a dramatic difference he makes to the partnership.

By the end of the book we’re more clued in as to who is up to what, but we’re going to have to wait for volume 16 to find out the outcome. Should be good.

And if you liked that: Lots more Largo available from www.cinebook.com

Nemo: River Of Ghosts
The Mystery Of The Crooked Imp: Tales Of Fayt