You are here: Home › The Inking Woman: 250 Years Of Women Cartoon And Comic Artists In Britain
By Simon Chadwick on May 13, 2018 in Reviews 0 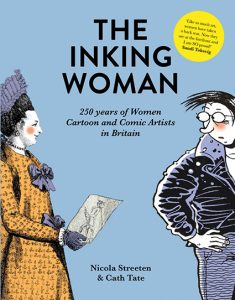 The successful Inking Woman exhibition held at the Cartoon Museum during 2017 has been splendidly transposed into a hardback book, and I have to say it’s rather excellent. Comprehensive in its scope covering caricaturists, gag cartoonists, editorial and strip cartoonists, and comic creators, it’s a celebration of the wit, wisdom and talent of the female British cartoonist across 250 years.

So many female creators are featured, each with a brief biography and accompanying artwork, meaning you only get a flavour of their work, but the presentation has context and makes many a compelling case for you to go away and discover more about any cartoonist that intrigues you. For me the most fascinating were the very early cartoonists, such as Mary Darly producing caricatures in the eighteenth century, selling her form of visual satire to the wealthy as prints. Then there’s Marie Duval (real name Isabella Emily Louisa Tessier) who, in the nineteenth century, produced cartoons for the cheap penny papers and early comics. But these two are just the tip of the iceberg in a book that’s full of creative cartoon talent.

It’s a monumental achievement, particularly looking back to non-contemporary cartoonists, most of which will be unfamiliar to the average punter, and so a deserved doffing of the cap to Nicola Streeten and Cath Tate for pulling it altogether and allowing the names of so many important names in the industry to be acknowledged.

If you missed the exhibition then buy the book and discover the magnificent contribution made by British women to the art form.

And if you liked that: Myriad have just published an entire book on Victorian cartoonist Marie Duval.