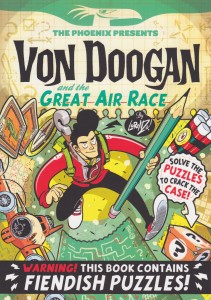 The Phoenix has been a breath of fresh air in British Comics and one of the regular contributors is Lorenzo Etherington, artist on Long Gone Don and creator of the fiendishly entertaining Von Doogan, a weekly puzzle-based strip that collectively forms a greater narrative, but requires you, the reader, to help along the way.

This second volume collects The Great Air Race, where adventurer Von Doogan, or the Doog, gets involved in an aerial chase with much despicable shenanigans, baffling interludes and head-scratching hiccups.

Having them collected in one book is a great way to enjoy the extraordinary detail and end effort that has gone into the pages and puzzles, with nearly every element densely illustrated in Etherington’s superb cartoon style.

Let us just remind ourselves that this is a kids’ comic that adults can enjoy, so it shouldn’t be too taxing.

Feeling somewhat cocky I sat down with my scrap of paper and pen and began, and knocked off the first puzzle that begins the adventure in no time at all. I’ll have this finished in no time, thinks I. Some considerable time later I complete puzzle 2, having mis-read the instructions in my smug haste and made an utter pig’s ear of it. Chastened, I slowed the pace, found the rhythm, and an hour later was still enthralled and not even half way through.

Each page is beautifully, and cleverly, designed, and the puzzles so varied in their structure and execution that time is eaten up by just enjoying the spectacle. Where else are you going to find something so brilliantly inventive, so exquisitely drawn and so thoughtfully put together?

Puzzle 5, for example, comprises of a brief comic strip where you must follow the clues to find out a winning bid for a plane, then using that figure out what Von Doogan can buy in the way of supplies based on some lovely illustrated adverts. Every space is utilised and there’s no clutter, and some puzzles are solved by carefully observing the finer background details of the drawings.

It really is a feast for the eyes and the brain, so regardless of your age you’re going to have some fun in having your noggin taxed.

And if you liked that: Pick up volume one from www.thephoenixcomic.co.uk. Equally, if you’ve not discovered Long Gone Don, grab a copy of that too while you’re at it