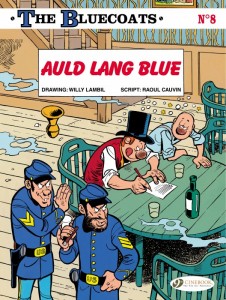 The Bluecoats is a book I could have very easily overlooked, but since discovering it it’s become a firm favourite in our house. Set during the American Civil War, it’s the tale of cavalrymen Sergeant Chesterfield and Corporal Blutch and their escapades on and off the battlefield. In this current volume we’re taken back to the very beginning of their story and learn how a butcher’s boy and a barman become enlisted in the war.

Chesterfield is the butcher’s boy, running errands for his boss and avoiding his boss’s somewhat overbearing and ugly daughter who has taken a shine to him. Chesterfield finds signing up to fight appealing – the right thing to do – but his job and his mother’s opinions are keeping him in check. It’s only when marriage to the butcher’s daughter looks like it’s a certainty that Chesterfield finds himself in Blutch’s bar and the two of them end up drowning their sorrows. By the time recruiting officers roll in the pair are truly wasted on drink, something the officers take full advantage of, and it’s not until they’ve sobered up some time later upon the back of a cart that they realise the nature of their predicament.

Although this isn’t played for laughs to the same degree as Lucky Luke, it’s still a funny book, and like Lucky Luke much of the plots are drawn for historical fact, so what you end up with is a slightly grittier comic tale that’s not afraid, now and then, to probe the darker side of war. It doesn’t overstep the line, but it definitely touches upon the starker realities at times, shaping the books’ unique narrative voice. There’s parody, sarcasm and slapstick in here to soften the tone, so it ends up being a solidly entertaining, and sometimes educational, read for both kids and adults. I for one would love to see them in school libraries.

If you’ve not read a Bluecoats book before then this is a good place to start as it offers a nice introduction to the characters and to the wider conflict.

And if you liked that: Volume 9, El Padre, is on its way soon