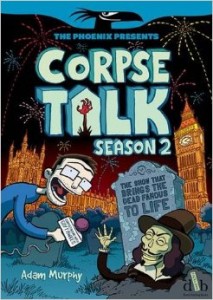 Adam Murphy’s second collection of interviews with the famous and noteworthy undead has arrived and it’s just as entertaining as the first one. Collected, and slightly expanded upon, from the strips that appear in The Phoenix, Corpse Talk sees Adam having a head-to-head interview with a notable long-dead individual and their past life, peppering it with interesting facts, oddities and the occasional yucky bits, but first and foremost, bringing history alive. Some of the ‘celebs’ children will be quite familiar with and some are quite obscure, but Adam’s gift is to compress a lifetime into (usually) two pages of cartoon panels distilling the juicy bits and adding in some laughs along the way.

In this collection you get some big names such as Guy Fawkes and the Queens Elizabeth and Victoria, a few that children may have heard of but know little about such as Laurel and Hardy and Homer, and some left-field but equally interesting folk like Amy Johnson and Alexander Selkirk.

Regardless of your age, though, you’re going to learn plenty, which is something I’ve always loved about comics – their ability to introduce new topics of discovery – and there’s so much in here, from Shakespeare’s knock-knock joke to Leif Erikson’s troubled extended family, that’ll keep you hanging on every word and smirking throughout.

Because they’re told in short, punchy double-page spreads it makes them instantly accessible to all, so surely a must for any classroom and library, or at the very least, a bedroom bookshelf. A tip of the hat to Mr Murphy – I’m looking forward to reading more.

And if you liked that: There’s always more in the Phoenix – check out www.thephoenixcomic.co.uk

Alone Vol 4: The Red Cairns
Win a copy of ‘Over The Top – a cartoon history of Australia at war’