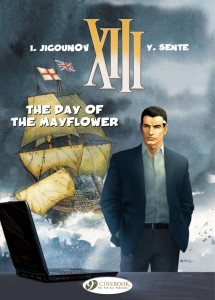 Without a doubt, the original 18 volume run of XIII by Vance and Van Hamme was possibly the most involved and ambitious thriller I’ve read in comics. Now a new creative team have been handed the title to extend the mysterious life of Jason Mclane – a Herculean task, but judging from this first volume in the new story arc one they just might pull off.

Jason’s been vindicated and is living a quiet life in Maine where he’s still attempting to piece together his memories. Following a suggestion by his psychiatrist he undergoes a procedure that stimulates buried memories and gains a glimpse of his childhood, including the identity of a childhood friend. Jason’s able to track him down and they arrange to meet, but before he arrives at his long-lost friend’s house someone else moves in to eliminate him. However, the assassin is not thorough enough and Jason’s timely arrival means he’s able to gather some information, including the knowledge that this friend has been investigating something to do with the Mayflower.

Meanwhile, the conspirators from the first story arc, all locked away in an Arizona jail, are all murdered in an apparent act of revenge that looks like it’s been committed by Jason, although in fact it’s a bold set-up that has also been used to spring one of the inmates. Before long Jason is once again being hounded by the law and a mysterious clandestine group, and all he has to rely on are his wits, his skills, and a few close friends.

Make no mistake, this is no lightweight read. Not only does it build upon the many layered stories of the past 18 volumes, it’s also laying down many fresh story threads and characters to build this new conspiracy. Sente does a grand job in recapping the past and leading you gently through it, but there’s still plenty to absorb and keep track of, and he very successfully captures the spirit of adventure and danger that made Van Hamme’s scripts so captivating. Jigounov’s art is also spot on, perfectly complementing Vance’s that went before with it’s clean lines and finely detailed depictions of people and places.

As an opening salvo, this has bags of promise, so here’s hoping the new creative team can maintain it throughout. So far, so good.

And if you liked that: If you’ve not explore them before head on over to www.Cinebook.com and get volume 1

The Mystery Of The Crooked Imp: Tales Of Fayt
Starlight: The Return Of Duke McQueen