You are here: Home › The Survivors (Quantum Anomalies): Episode 1
By Simon Chadwick on December 22, 2014 in Reviews 0 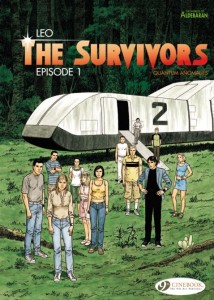 It’s a welcome return for Leo’s Worlds of Aldebaran series as he spins out a new humanist story set in the same universe as Kim Keller’s adventures but taking us down a different path entirely. A spacecraft is on route to Aldebaran to deliver thousands of colonists when it hits a quantum anomaly that begins to shred the ship from the outside in. One of the crew has the presence of mind to launch one of the shuttles, containing teenaged children in hibernation, and escapes the catastrophe, only for the crew member to realise he won’t survive the journey to the nearest habitable planet. However his actions will save the dozen in hibernation so he sets the shuttle’s course and the first any of the inhabitants are aware of their predicament is once they’ve landed.

Fortunately the planet is warm enough, with a breathable atmosphere, but it is still an alien world and they have to work quickly to obtain food and water. There’s also the dawning realisation that they’ll be presumed dead as part of the larger spacecraft’s destruction, so nobody is going to come looking for them. Whatever life they thought they were going to have once leaving Earth has now been turned upside down.

Now, being a group of hormonal teenagers, from varying nationalities, there is naturally plenty of bickering, unnecessary squabbling and unreasonable behaviour that doesn’t always go hand-in-hand with the gravity of their situation, but that’s teenagers for you. As the enormity of their situation grows the group’s natural leaders and more difficult members begin to make themselves obvious, and no more so when two of the group are abducted.

As always, a superbly engrossing book from Leo exploring the possibilities of our future where exploration and the fascination of life’s endless possibilities create the perfect backdrop for a story of survival, determination and discovery. Leo appears to be promising a rich world of many species, not all necessarily of the planet, so the series is offering plenty of promise. Intelligent, and entertaining, this should be on your reading list.

And if you liked that: Make sure you’ve read the other Worlds of Aldebaran books

Swamp: On The Road Again & Swamp: Top Of The Heap
Merry Christmas from The Cartoonists’ Club of Great Britain