You are here: Home › Herne Bay Cartoon Festival now on!
By Cartoonists Club on July 29, 2018 in Cartooning News 1

Exhibitions are now open at the sixth Herne Bay Cartoon Festival and more than 20 of the UK’s top cartoonists will descend on the Kentish seaside town next weekend for three days of talks, workshops and live drawing. 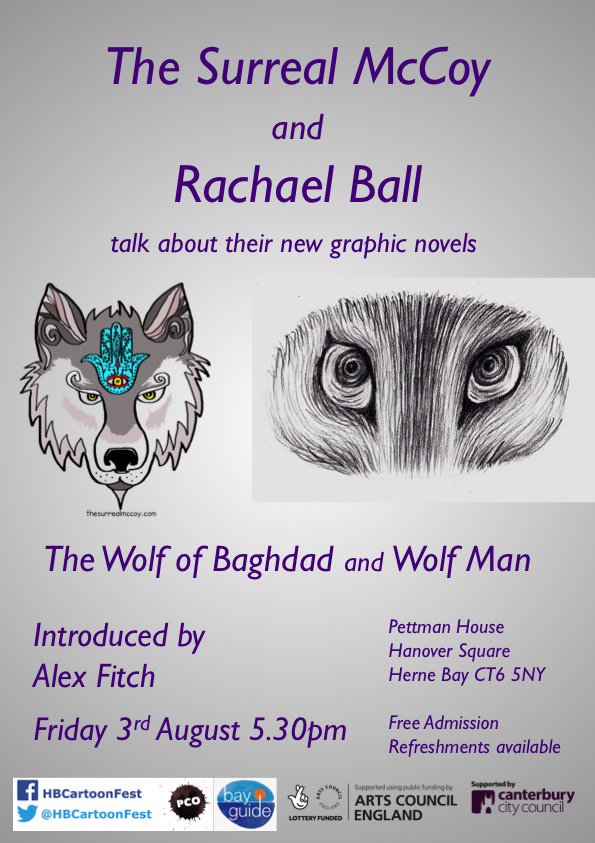 The first festival event is a discussion featuring The Surreal McCoy and Rachael Ball. They will talk about their work-in-progress graphic novels, The Wolf of Baghdad and Wolf Man. The event is hosted by Alex Fitch, journalist and critic behind the Panel Borders radio show. It takes place on Friday 3 August at 5.30pm at Pettman House, Hanover Square.

On Saturday 4 August, Alex Hallatt will run a workshop for kids at Beach Creative, Beach Street, from 11.30am-1pm. Creator of the syndicated comic strip Arctic Circle, she is British but lives in New Zealand and is visiting the festival while on a trip to the UK. 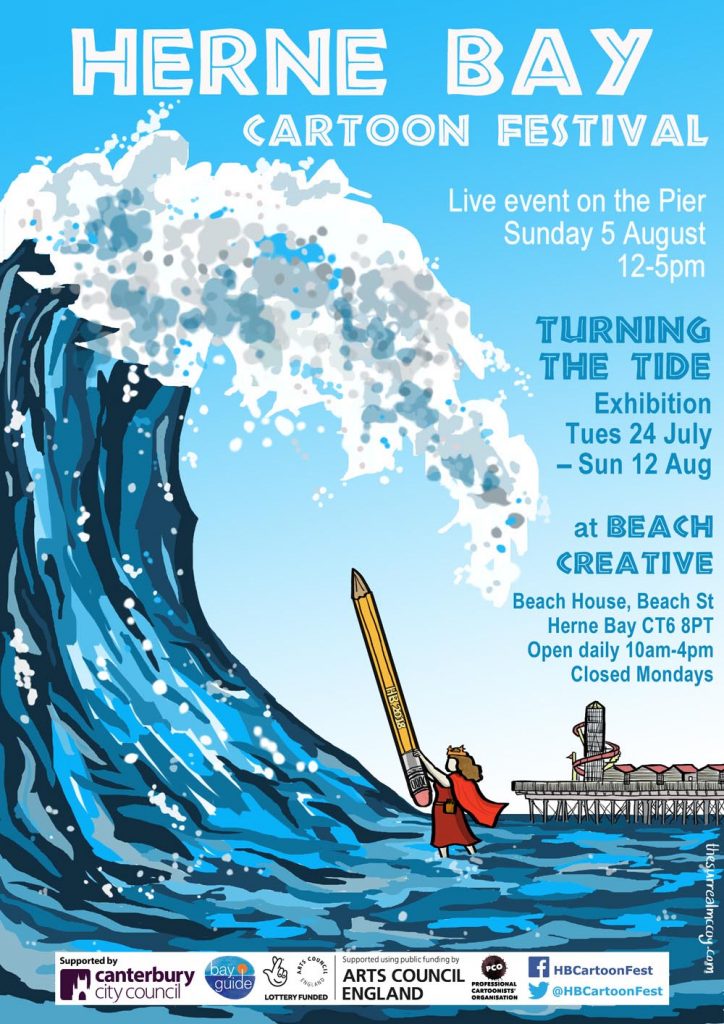 The main festival day is the Sunday 5 August. The cartoonists will gather on Herne Bay Pier from midday to draw big-board cartoons, seaside peep boards, caricatures and more. As ever, there will be a chance for the public to get involved with drawing on big boards, plus they can play drawing games with the Guardian cartoonist Ros Asquith.

The festival exhibition Turning the Tide is now open at Beach Creative and runs until Sunday 12 August. The theme, which is always linked to the seaside location, acknowledges that the past 12 months have been eventful for women. It is 100 years since the first women won the vote, we’ve seen the birth of #MeToo and #TimesUp, the protests over the gender pay gap … and even the first woman Doctor Who.

Of course, the festival always lets cartoonists interpret the theme however they see fit so, inevitably, the choppy waters of Brexit are visited and there are Turning the Tide cartoons about plastic in the oceans. 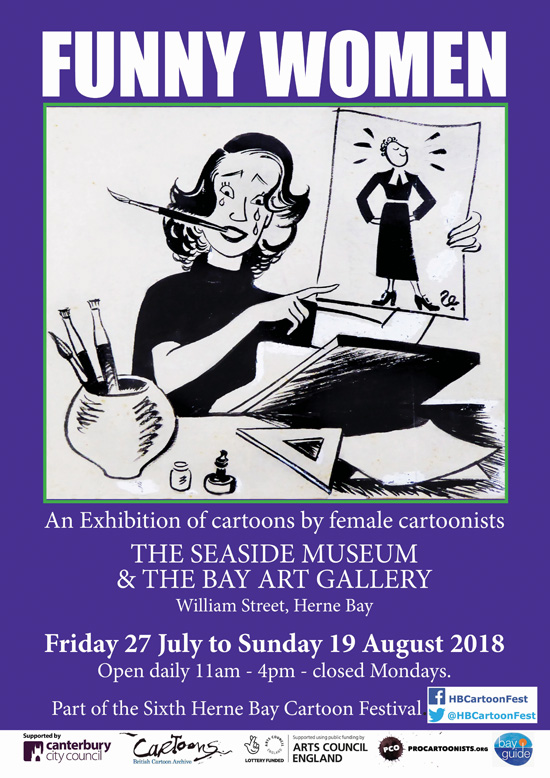 Also open now is Funny Women, an exhibition held jointly at the Seaside Museum and Bay Art Gallery, both on William Street. The show runs until Sunday 19 August.

It looks at women cartoonists and illustrators from the past 100 years and includes Mary Tourtel, creator of Rupert the Bear, and Tove Jansson of Moomins fame, alongside contemporary cartoonists such as Riana Duncan, Posy Simmonds, Nicola Jennings, Grizelda, Martha Richler (Marf) and many more. The exhibition is held in conjunction with the British Cartoon Archive in nearby Canterbury.

There will be a private view of Funny Women on Friday 3 August at the Seaside Museum, then the Bay Art Gallery, 7pm-8.30pm.

Also this year, a group of US women cartoonists were invited to give their perspective on the festival theme and the work of Isabella Bannerman, Maddie Dai, and Liza Donnelly will feature in both the Turning the Tide and Funny Women exhibitions. 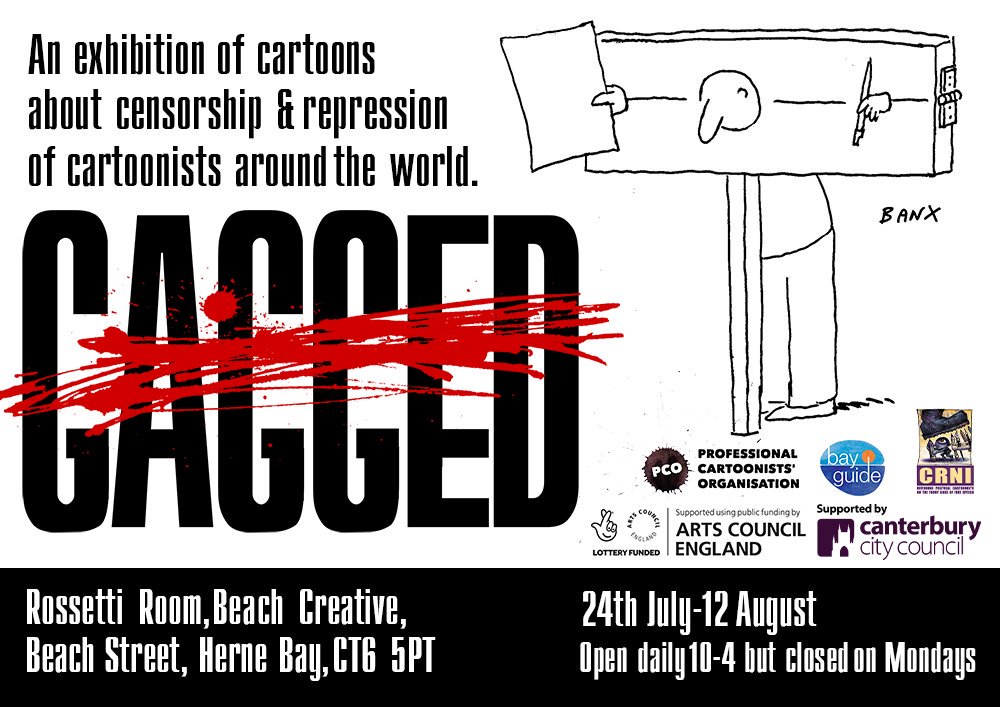 Alongside the main show at Beach Creative, the festival also hosts the PCO‘s Gagged exhibition in the Rossetti Room, which is about the censorship and oppression of cartoonists around the world. It ran at Westminster Reference Library last year. The Herne Bay version runs until Sunday 12 August.

One Response to Herne Bay Cartoon Festival now on!