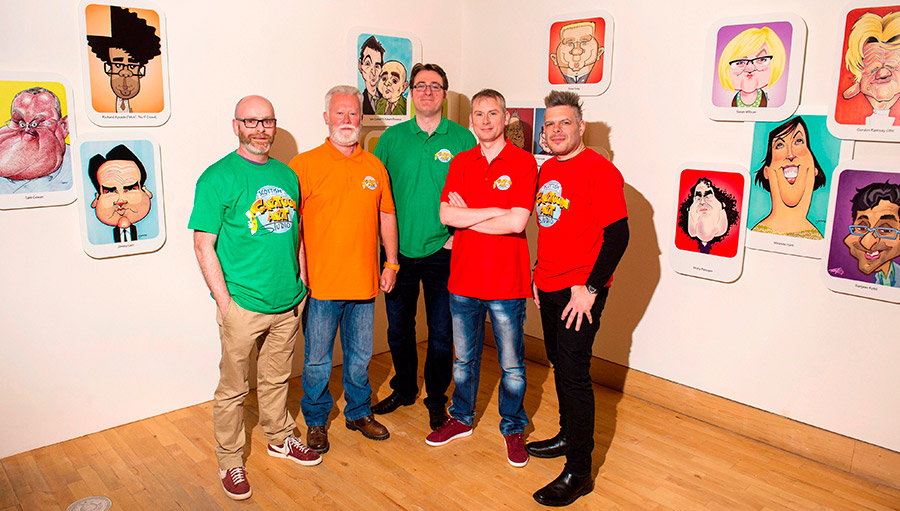 Movie stars and musicians, sporting heroes and TV personalities will all star in a special exhibition marking a decade of Fizzers opening at Glasgow’s People’s Palace on 27 May 2016

Fizzers: 10 Years of Caricature features over 120 international icons and Scottish celebrities as you have never seen them before – each captured in caricature by five artists from the Scottish Cartoon Art Studio. 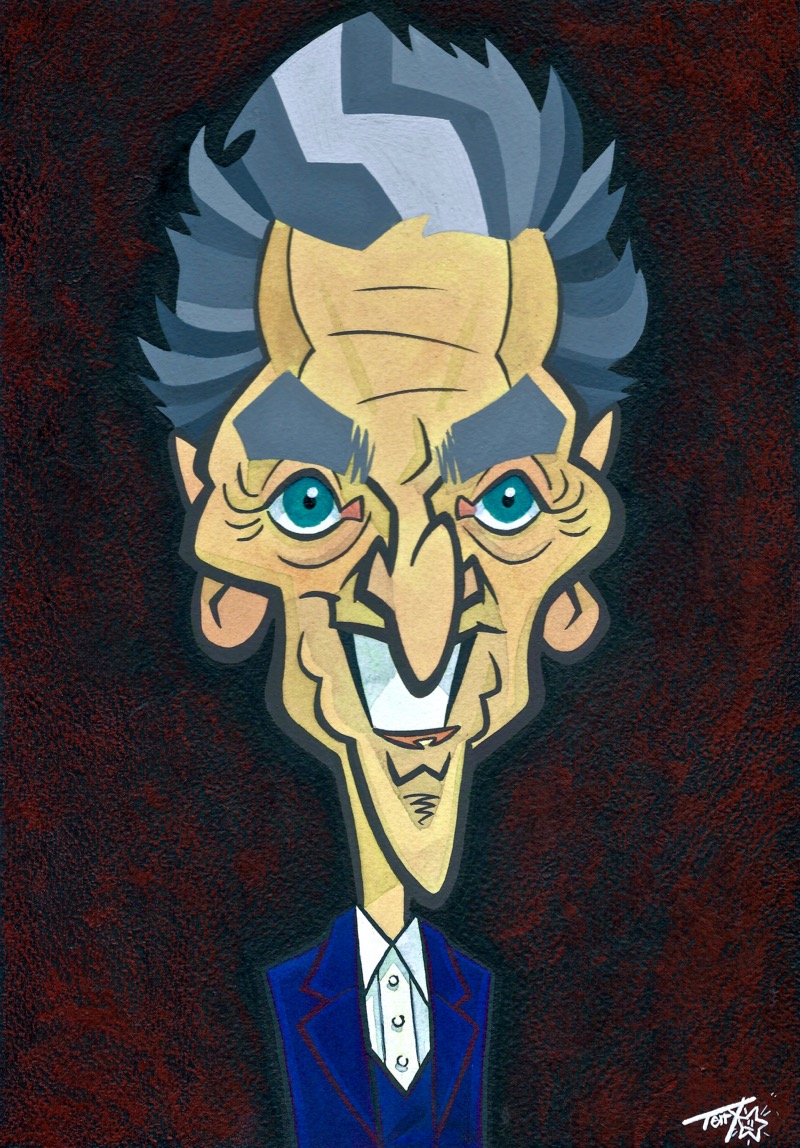 ‘Fizzer’ is Glaswegian slang for face and, at this new exhibition, visitors of all ages can delight in the drawings of well-known Fizzers from across the world, then share their favourite on social media using #fizzers10. Adele, Lady Gaga, Bay City Rollers, Rihanna and Bob Dylan are just a few of the singing super stars whose Fizzer has been created for this exhibition, along with a special tribute to David Bowie featuring several caricatures of his unique stage personas.

To coincide with Euro 2016 Championship, a squad of famous football fizzers fit to rival any fantasy dream team will be on display alongside caricatures of world-class sports people including Andy Murray, Liz McColgan and David Wilkie. Meanwhile, Doctor Who fans can reminisce over fifty years of adventures in space and time with a special section featuring each of the 12 time lords from William Hartnell to Peter Capaldi. Closer to home, local heroes such as Phil and Ally, Benny Lynch and Jimmy Reid are celebrated with their own cartoon portraits.

Caricaturist Derek Gray describes his methods of creating a caricature:  “I enjoy switching between media and style. So I might paint in acrylics, cross-hatch with pen and ink or add watercolour and colour pencil to a clear ink line. Sometimes the face suggests an approach and other times it will just be on a personal whim. The young and beautiful are generally less interesting to draw. Everyone wants rid of their wrinkles, saggy jowls and baggy eyes, but caricaturists want you to keep them.”

This exhibition reflects upon a decade’s worth of Fizzers selected from the existing collection of 400+ caricatures created in a mix of traditional and digital media. Many of the works will be making their debut at this exhibition, which is designed to be much more than conventional rows of framed art on the wall.

Studio Co-ordinator Terry Anderson explains:  “By definition caricatures are bold and humorous work so visitors shouldn’t expect a straight-laced gallery show. In addition we’ll have some hands on activities and interactive digital labels adding to the surprises in store.” 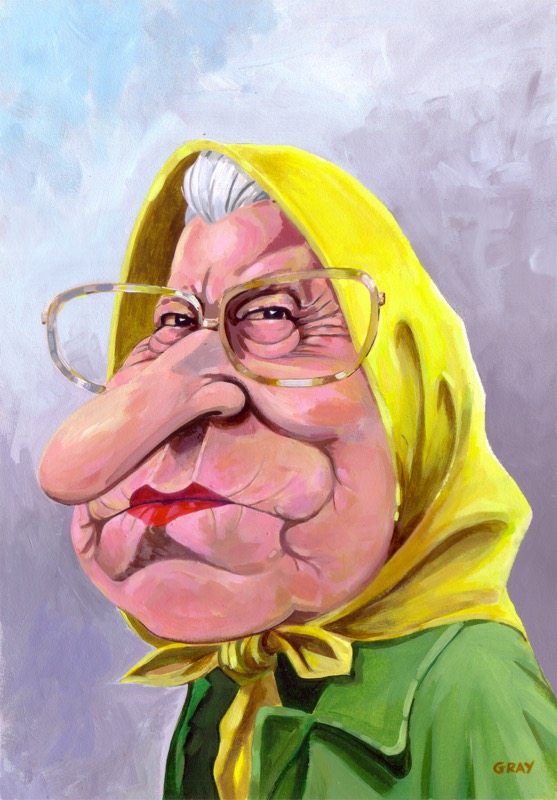 The exhibition marks 10 years of the Fizzers brand. Since 2006, these five Glasgow artists have been creating caricatures inspired by a European approach where humorous exaggeration of the face is prized above all.

Tommy Sommerville remembers the effect a visit to France had on him: “I don’t mind saying I sometimes feel I was born in the wrong country. Caricature tends to be misunderstood here in Scotland. I was amazed at the difference in France, the quality of the work we saw there and the respect and affection shown to cartoonists, most of all because a caricature is not seen as an insult.”

The exhibition also offers visitors the opportunity to find out more about the artists, their process and what it means to be the subject of a caricature. A programme of activities and events inspired by Fizzers will take place alongside the exhibition, including a chance to try your hand at creating a caricature at summer workshops lead by the artists from the Scottish Cartoon Art Studio. Details will be released throughout the run of the exhibition.

People’s Palace is located on Glasgow Green, Glasgow G40 1AT
Tel: 0141 276 0795.
Open Tuesday to Thursday and Saturday 10am to 5pm and Sunday 11am to 5pm.
It is free to enter. For more information visit www.glasgowmuseums.com. 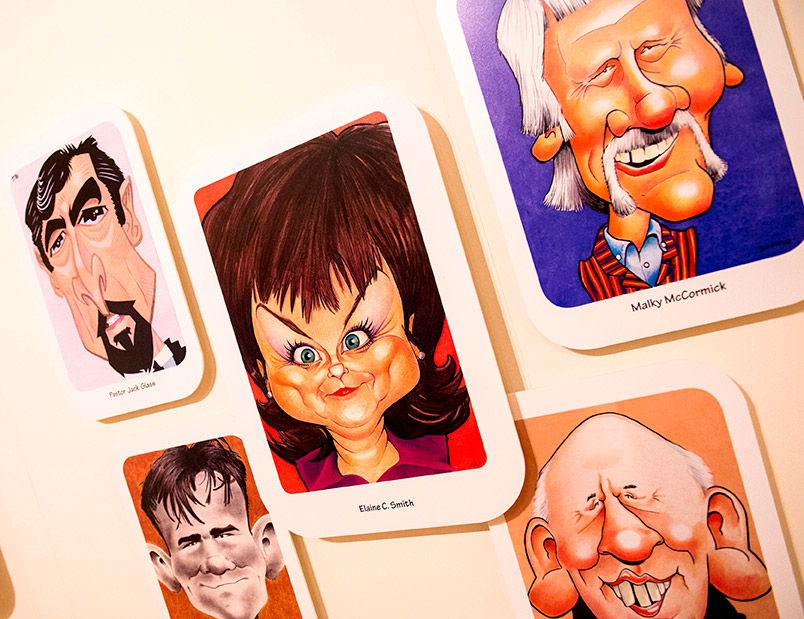 Spirou & Fantasio Vol 9: The Dictator & The Mushroom
HOW DO YOU DO THAT THEN? – SHADING