You are here: Home › Martin Honeysett Exhibition
By Ron Mc Geary on December 2, 2015 in Cartooning News 0 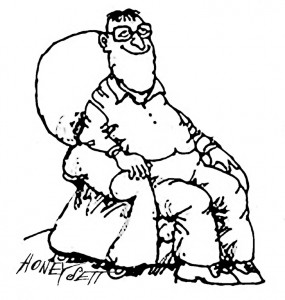 20, this year, the famous satirical cartoonist Martin Honeysett sadly died at the age of 71.

Martin was one of Britain’s best known cartoonists and illustrators, and was held in very high esteem by his fellow artists and his many fans. His spidery illustrations perfectly captured the venom and anger he felt for the modern age, and his work was in great demand. During a career spanning four decades, Martin worked for a number of magazines and newspapers, including, among others, Punch, The New Statesman, Private Eye, The Oldie, The Sunday Telegraph and The Observer.

On January 20, 2016, the Cartoon Museum will be hosting an exhibition of Martin’s work which will feature over 120 drawings from across his career including those for Punch, Private Eye, The Oldie, illustrations for a diverse number of books, drawings done, and other unpublished material. From 2005, he spent two years as a visiting Professor at Kyoto Seika University, the only institution in the world to have a cartoon faculty,