You are here: Home › Political Cartoon Gallery and Cafe reopens
By Cartoonists Club on November 13, 2015 in Cartooning News 0 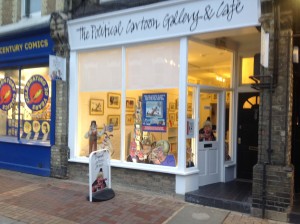 The Political Cartoon Gallery and Café has recently reopened in London offering the widest selection of original cartoons for sale in the United Kingdom and indeed the world.

The gallery is owned and run by Dr Tim Benson the leading authority on political cartoons and who has himself produced numerous books on the subject. There are regular exhibitions of original cartoon art by current leading British cartoonists such as Steve Bell, Martin Rowson, Dave Brown, Christian Adams and Peter Brookes as well as cartoonists of yesteryear such as Sir David Low, Leslie Illingworth, Sidney Strube, Fougasse, H. M. Bateman, E. H. Shepard and many many more.

A permanent display features some of the most famous and iconic political original cartoons of the last century including Philip Zec‘s ‘Don’t lose it again!’ And ‘The Price of petrol has gone up by one penny official!‘ plus the Punch cartoon that upset Winston Churchill.

All that and great coffee too! 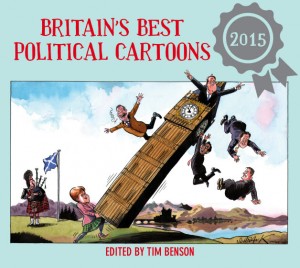 The opening of the gallery by Alistair McGowan in October also saw the launch of Britain’s Best Political Cartoons 2015, the third in a series of the best political cartoons published in the UK. Always a great look back over the year.  (read our review of the 2014 edition here)

You can browse their vast online archive of original art for sale at http://www.original-political-cartoon.com/

Opening hours: Monday to Saturday 10am to 5.30pm