You are here: Home › Milk Snatcher, Gerald Scarfe – The Thatcher Drawings
By Cartoonists Club on March 4, 2015 in Cartooning News 0 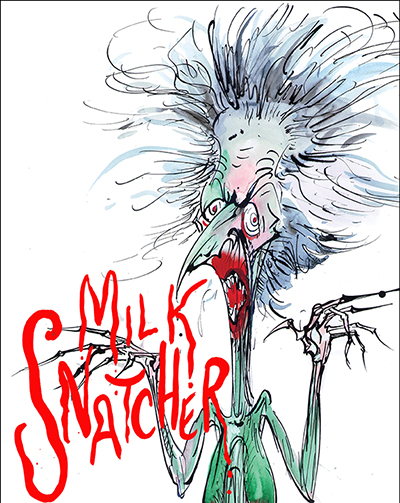 Gerald Scarfe’s satirical depictions of Margaret Thatcher are the subject of an exhibition at The Bowes Museum, opening this month. This previously un-exhibited body of work spans a 22 year period and illustrates the turbulent career of one of the most significant political figures of recent times.

These illustrations chart the Iron Lady’s time as a member of the shadow cabinet, her leadership of the Conservative Party, her tenure as Prime Minister, and, ultimately, her political decline.  The cartoons are vivid reminders of the miners’ strike, the Falklands War and the close relations Maggie struck up with the USA. In colourful pen and ink, Thatcher is varyingly depicted as cunning, razor sharp and perversely sexual.  They depict Thatcher in multiple guises as a shark, a chicken and an axe.

“I didn’t agree with her values, but she was amazing material. I could turn her into anything acerbic or cutting, like a dagger or a knife, probing and vicious.”

This exhibition will demonstrate the enormous contribution Gerald Scarfe has made to both political commentary and graphic art. The sweeping gesture of his pen stroke, his colour palette linked to the introduction of colour print at The Sunday Times and the influence he has drawn from artists such as Francis Bacon, place Scarfe as one of the finest political cartoonists of our time. His scrutiny of Thatcher’s political career and impact is particularly poignant as we approach the next general election. 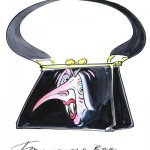 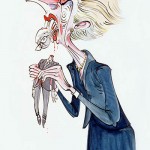 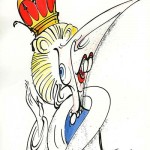