You are here: Home › The Beano has arrived at St Pancras International
By Cartoonists Club on October 24, 2014 in Cartooning News 0 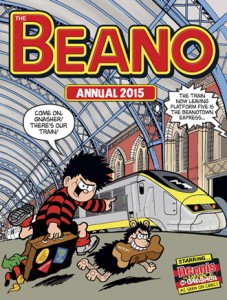 St Pancras International has become a haven of mischief and fun as the country’s longest running comic, The Beano, joins forces with the UK’s favourite station.

The station graces the front of this year’s The Beano 2015 Annual and to celebrate it is playing host to an exciting thirteen week party with Dennis the Menace and The Bash Street Kids.

The party starts on Monday 20th October and runs through to Monday 5th January 2015. Various activities taking place include:

October half term holidays also signals the chance to meet one of The Beano’s illustrators through a series of master classes.

“The launch of The Beano Annual is always an event and each year we create new content and have more pages than many others in the market. There is a huge affection for this much-loved brand in the UK and after more than a year in the making, we’re really excited to be able to finally unveil this exclusive partnership with St Pancras International to support the nation’s favourite annual.”

“As the nights draw in and the weather starts to get colder, we wanted to inject a bit of fun and frivolity into the daily commute. Dennis the Menace and the gang are known for creating mayhem and mischief so who better to put a smile on people’s faces.”